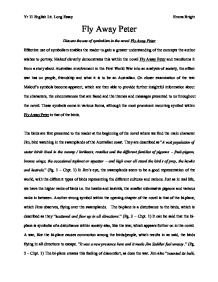 Discuss the use of symbolism in the novel Fly Away Peter

Yr 11 English Lit. Long Essay Emma Bright Fly Away Peter Discuss the use of symbolism in the novel Fly Away Peter Effective use of symbolism enables the reader to gain a greater understanding of the concepts the author wishes to portray. Malouf cleverly demonstrates this within the novel Fly Away Peter and transforms it from a story about Australian involvement in the First World War into an analysis of society, the effect war has on people, friendship and what it is to be an Australian. On closer examination of the text Malouf's symbols become apparent, which are then able to provide further insightful information about the characters, the circumstances that are faced and the themes and messages presented to us throughout the novel. These symbols come in various forms, although the most prominent recurring symbol within Fly Away Peter is that of the birds. The birds are first presented to the reader at the beginning of the novel where we find the main character Jim, bird watching in the swamplands of the Australian coast. They are described as "A vast population of water birds lived in the swamp / lorikeets, rosellas and the different families of pigeons - fruit-pigeon, bronze wings, the occasional topknot or squatter - and high over all stood the birds of prey, the hawks and kestrels." ...read more.

(Pg. 27-28 - Chpt. 3) Capturing this one perfect moment of the Sandpiper is symbolic of trying to capture life and fixing it "maybe for ever". Imogen later realizes that life is a cycle and must continue, but the photograph of the bird is her way of trying to keep that moment, that life alive forever. The Dunlin, which is first mentioned in chapter 7 and later again in chapter 9 is another important symbol used by Malouf. Jim is amazed by the presence of the bird as, "It doesn't occur" (Pg. 48 - Chpt. 7), whereas Imogen sees it as quiet ordinary as she knows it as a common bird back home in Europe where she comes from. The Dunlin is appreciated differently by Jim, "and immediately on his lips it sounded different, and it wasn't just the vowel. / At its difference in his mouth and hers." (Pg. 47 - Chpt. 7) We are given their opposing views on the Dunlin and Imogen finds "she was amazed by this new vision of him, his determination, his intensity." (Pg. 49 - Chpt. 7) This relates to Jim going to the war and how Miss. Harcourt feels that he is different; his determination is similar to when he goes to war. As Jim finds the bird unique and captivating, it seems that he's enjoying something that he doesn't feel will last forever. ...read more.

symbolizes how the cycle of life goes on, it is repeated over and over again as people live out their lives - ride on the crest of the wave, but then must eventually fall into the ocean and die. This understanding of the symbols used to represent the cycle of life allows Imogen and the reader to comprehend the death of Jim. That we are all a component of the cycle of life, and that Jim has had his time riding the crest of the wave, and now must fall into the ocean so that the cycle can be repeated. Malouf is able to effectively use symbolic representation within his novel Fly Away Peter to provide us with further insight into the characters, their relationships, the society in which they are positioned and the circumstances with which they must face. They allow us to understand Jim's perception of the war and how he feels about its presence within their society. We're shown Miss Harcourt and Jim's desires to understand what life is all about. One of the most important themes of the novel is presented to the reader through symbolic suggestions, which is the concept that life is an ever-going cycle, which peaks and then must eventually fall away. The symbols throughout Fly Away Peter help present that central theme Malouf is trying to tell us, that "life wasn't for anything. It simply was." (Pg. 132 - Chpt. 18) ...read more.

The essay writer has presented us with thoughtful insights into the purpose and themes of this novel. The bird imagery in particular is well presented and supported by relevant quotations and skilful analysis. In particular, the comparisons and contrasts between the worlds of birds and of humans is well brought out here, especially when referring to the war episodes.

Punctuation is a little sloppy and some grammatical structures are clumsy. However, paragraphing is well managed, with an excellent introduction and good conclusion.