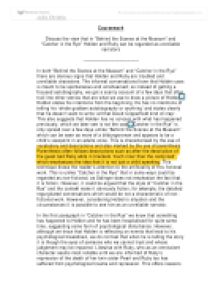 Discuss the view that in &quot;Behind the Scenes at the Museum&quot; and &quot;Catcher in the Rye&quot; Holden and Ruby can be regarded as unreliable narrators

Julia Christie Coursework Discuss the view that in "Behind the Scenes at the Museum" and "Catcher in the Rye" Holden and Ruby can be regarded as unreliable narrators ---------------------------------- In both "Behind the Scenes at the Museum" and "Catcher in the Rye" there are obvious signs that Holden and Ruby are troubled and unreliable characters. The informal conversational tone that Holden uses is meant to be spontaneous and unrehearsed; so instead of getting a focused autobiography, we get a scanty account of a few days that often trail into other stories that are what we use to draw a picture of Holden. Holden states his intentions from the beginning. He has no intentions of telling his 'whole goddam autobiography or anything' and states clearly that he doesn't want to write 'all that David Copperfield kind of crap'. This also suggests that Holden has no concern with what has happened previously, which we later see is not the case. "Catcher in the Rye" is only spread over a few days unlike "Behind the Scenes at the Museum" which can be seen as more of a bildungsroman and appears to be a child's viewpoint in an adults voice. This is characterised by the use of vocabulary and descriptions and also marked by the use of parenthesis. Parenthesis often follows descriptions such as after the description of the guest bed Ruby adds in brackets 'much nicer than the camp bed' which emphasizes the idea that it is not just a child speaking. ...read more.

His unconventional ideas and behaviour cause him to be labelled a 'phoney' by Holden. He is very understanding of Holden and doesn't mind his late calling, drunkenness or him smoking, even saying 'have a cigarette'. Mr Antolini also shows that he is comfortable around Holden and doesn't act differently around him or speak to him as a student. We see this straight away how he jokes with Holden excusing the mess of the apartment and describing his wife's friends as 'some buffaloes'. However, Mr Antolini frightens Holden as he wakes to find him touching his forehead. Mr Antolini was wrong to approach Holden in this way, overstepping the boundary in his display of concern and affection. He seems to think however, that it was acceptable. Holden describe him as acting 'very goddam casual and cool' suggesting that Mr Antolini was acting perversely. Holden leaves immediately but later regrets his earlier accusations. He remembers that Mr Antolini had 'certainly'd been very nice' to him. There is no consistency in his opinions of anyone as he starts off saying that Mr Antolini was acting perversely then later thinks that Mr Antolini is 'still ok'. Another example of this is at first Holden views Mr Antolini as a bit of a hero as 'he was the one that finally picked up that boy that jumped out of the window' this again cast doubts on his reliability as a narrator as he is very ambiguous by him. ...read more.

As a teenager she realises that something is wrong with her, even saying that as an onlooker she would say, 'that child needs help'. It is only when Bernard alerts her as to what she has supposedly done does she realise that she has suffered repression, consequently forgetting the existence of Pearl. We then begin to piece together the information that Ruby unreliably left out. The omission of Bab's death also shows Ruby's inability to face up to her loss. Although by the end of the novel the picture is complete, one cannot help but think that Ruby's repression has lead to more unreliability as a narrator than it originally appears. Despite both Holden and Ruby being considered to be unreliable narrators, on the surface this doesn't seem to be paramount when reading the novels. It has been said the number of readers who have been able to identify with Holden and have idolised his as their hero is staggering. There have been thoughts that there is something about his discontent and his vivid way of expressing it, makes many readers feel that they can relate to him, from what ever background they may be from. Instead of looking at his faults many reader revel in his cantankerousness and admire him. Likewise, many readers grow to love Ruby's character and despite her unreliability by the end of the novel readers may see her as a victim of the repression which caused this unreliability. The fact that it was clearly no fault of her own leaves Ruby being portrayed as an extremely exceptional character. ...read more.

The writer is articulate and very engaged, showing some interesting points of comparison and contrast between the novels. With more focus on technique and less on relaying content, this essay would have achieved a top rating. ****