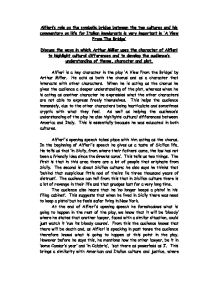 Discuss the ways in which Arthur Miller uses the character of Alfieri to highlight cultural differences and to develop the audience's understanding of theme, character and plot.

Alfieri's role as the symbolic bridge between the two cultures and his commentary on life for Italian immigrants is very important in 'A View From The Bridge' Discuss the ways in which Arthur Miller uses the character of Alfieri to highlight cultural differences and to develop the audience's understanding of theme, character and plot. Alfieri is a key character in the play 'A View From the Bridge' by Arthur Miller. He acts as both the chorus and as a character that interacts with other characters. When he is acting as the chorus he gives the audience a deeper understanding of the plot, whereas when he is acting as another character he expresses what the other characters are not able to express freely themselves. This helps the audience immensely, due to the other characters being inarticulate and sometimes cryptic with what they feel. As well as helping the audience's understanding of the play he also highlights cultural differences between America and Italy. This is essentially because he was educated in both cultures. ...read more.

This line also tells the audience that what is to happen is also inevitableand that it is all down to fate. Alfieri's second appearance in the play also starts at the chorus. This appearance is very brief, however it does give the audience a very detailed description of Eddie. It tells the audience things about him which they may not have picked up on and also tries to erase any preconceptions they have of him at this time. At the end of this appearance Alfieri also sets the scene for the next scene. This helps the audience to understand what is going on before it starts. His next appearance is also very brief and once again he is acting as the chorus. However, this appearance is very significant. 'Eddie Carbone had never expected to have a destiny'. This line gives further evidence that what is going to happen to Eddie is fate and cannot be changed. This is also supported by Alfieri saying 'Now, as the weeks passed, there was a future, there was a trouble that would not go away.' ...read more.

Alfieri's conversation with Marco lets Marco know about the differences between American and Italian cultures. 'In my country he would be dead now. He would not live this long'. We know from this that in Italian culture people and families take matters into their own hands and seek revenge but Alfieri lets him know that it is different from this, 'to promise not to kill is not dishonourable'. Alfieri knows what Italian culture is like and what honour is about but he doesn't let this get to him and states what is the truth, especially in America. Alfieri knows what Marco is feeling and lets the audience know what this is when he says 'only God makes justice'. As Marco and the American law have different views on justice. Alfieri plays a vital role of 'filling in the gaps' to the audience with what they may not have picked up or not being able to see. He does this by speaking directly to the audience as the chorus by breaking down the fourth wall, and as another character that helps express other characters' feelings. By doing this he highlights cultural differences and develops the audience's understanding of the play. ...read more.