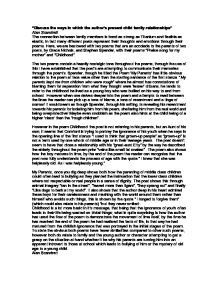 Discuss the ways in which the authors present child family relationships in Praise song for my mother and Childhood.

"Discuss the ways in which the author's present child family relationships" Alan Scandrett The connection between family members is bond as strong as Titanium and flexible as elastic, in fact many different poets represent their thoughts and emotions through their poems. Here, we are bestowed with two poems that are an accolade to the parents of two poets, by Grace Nichols, and Stephen Spender, with their poems "Praise song for my mother" and "Childhood". The two poems contain a heavily nostalgic tone throughout the poems, through the use of this I have established that the poet's are attempting to communicate their memories through the poem's. Spender, though he titled the Poem 'My Parents' has little obvious relation to the poem at face value other than the starting sentence of the first stanza " My parents kept me from ...read more.

However in the poem Childhood the poet is not referring to his parents, but an Aunt of his own; it seems that Cornford is trying to portray the ignorance of his youth when he says in the opening line of the first stanza "I used to think that grown-up people" as "grown-up" is not a term used by one who is of middle age or in their teenage years. The poet doesn't seem to have that close a relationship with his "great-aunt Etty" by the way he described the elderly throughout the poem prior "veins like small fat snakes" . The poem also shows how the boy matures in time, by the end of the poem the reader can recognise that the poet now fully understands the process of age with the quote " I knew that she was helplessly old. ...read more.

being wasted on trivial things; what is quite surprising is how the author has used the flow of the poem to demonstrate the movement of time itself, by the time he has reached the end of the poem he had realised the facts of life, in that way he had matured from the childish ignorance that was portrayed in the initial stages of the poem. To state the obvious both poems have fewer similarities compared to other such poems, however both do relate to family and the young author or character attempting to get a grasp on the situation at hand whether it be why his parents are turning him into an apparent introvert to those at school which leads to bullying of him or the mystery of old age to a young child. Alan Scandrett 675 words : ...read more.