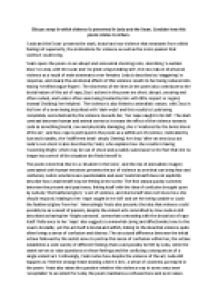 ﻿Discuss ways in which violence is presented in Leda and the Swan. Consider how this poem relates to others. ?Leda and the Swan? presents the stark, brutal and raw violence that emanates from within feelings of superiority, the motivations for violence as well as the ironic passion that violence could bring. Yeats opens the poem on an abrupt and somewhat shocking note, describing ?a sudden blow? to Leda, with the swan and ?its great wings beating still?, the raw nature of physical violence as a result of male dominance over females. Leda is described as ?staggering? in response, and clearly the emotional effects of this violence results to her being reduced into having ?terrified vague fingers?. The shortness of the lines in the poem also contribute to the brutal nature of the act of rape; Zeus? actions in the poem are short, abrupt, uncaring and often rushed, and Leda is often seen being treated by him with little respect or regard, instead ?[holding] her helpless?. ...read more.

Interestingly Yeats also presents the idea that violence could possibly be as a result of passion; despite the violent acts committed by Zeus Leda is still described as having her ?thighs caressed?, somewhat contrasting with the brutal act of rape itself. Reference to her ?nape? also suggests a somewhat caring and affectionate tone to the swan?s brutality, yet the act itself is brutal and selfish, linking to the idea that violence quite often brings a sense of confusion and distress. The structural difference between the initial octave followed by the sestet serve to portray this sense of confusion within her; the octave establishes a wide variety of different feelings that could possibly be felt by Leda, while the sestet serves to raise questions on those feelings and the confusing consequences of a single violent act. Confusingly, Yeats notes how despite the violence of the act, Leda still happens to ?feel the strange heart beating where it lies?, a sense of closeness portrayed in the poem. ...read more.

With this poem, Yeats describes how a single simple action done purely on a sudden impulse as Zeus does only causes trouble in the future, and Yeats hints towards the destruction of Troy as being the ultimate consequence of his actions; Yeats also notes in ?An Irish Airman foresees his Death? that the single impulse decision of the airman has led him to be in a situation which brings to end to his own life. Yeats presents the theme of violence as abrupt, sharp, stark and shocking when describing the horrors of Zeus? actions towards Leda, presented with an animalistic, uncaring sense. Despite this, he suggests that the violence used by Zeus was somewhat overwhelming for Leda, and the poem clearly shows how her own thoughts are confused; she does not seem to be able to attempt to push Zeus away from her, yet arguably somewhat tries to prevent him. Ultimately despite the ironic passion, Yeats ends on a note that the violence by Zeus was brutal, shocking and would only end in further destruction, the final consequence of a single action. ...read more.