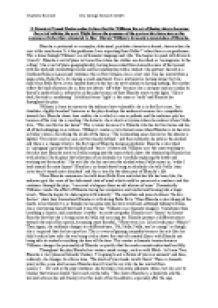 ﻿Charlotte Bennett City College Norwich 18125 ?A Streetcar Named Desire makes it clear that for Williams the act of fleeing always becomes the act of reliving the past. Flight forces the presence of the past on his characters as the presence of what they attempted to flee.? Discuss William?s dramatic presentation of Blanche. Blanche is portrayed as a complex, delusional, psychotic character in denial, shown when she says at the conclusion ?Is it the gentleman I was expecting from Dallas?? when there is no gentleman. This is done through William?s use of dramatic language and style ?She begins to speak with feverish vivacity?. Blanche is out of place in Scene One where her clothes are described as ?incongruous to the setting?. She is out of place geographically, having been exiled from Laurel because of the turmoil with her husband committing suicide and her relationship with a student. She portrays herself as a Southern Belle in Laurel and continues this in New Orleans-she is a lost soul. She has moved from a large estate, Belle Reve, to sharing a small apartment. She is portrayed as having money but she didn?t buy Belle Reve, it was handed down to her but she never admits to having nothing. ...read more.

Blanche uses ?honey? to distract from the fact that she is being mean to Stella and accusing her. Blanche portrays a different nature towards the end of her speech, becoming more forceful, ?Where were you. In bed with your ?Polack!? Then, again, she suddenly changes to a different tone, ?Oh, Stella, Stella, you?re crying!? as though she is surprised that she has upset her. This is a way of gaining sympathy because she acts like she didn?t realise how rude she was being-it also shows the start of a mental illness with Blanche not being able to control everything she does all the time. This creates a dramatic tension because Williams changes the personality of Blanche so quickly that the reader cannot understand her fully. Throughout the play Blanche has various mood swings, such as with Mitch. In Scene Two, Blanche is very pleasant towards Stanley, ?I?m going to ask a favour of you in a moment? and then, suddenly, she changes to a fierce tone, ?The touch of your hands insults them!? There is dramatic irony in this scene also because Blanche doesn?t want to say why she has moved from Laurel, ?I?Uh? and as the play continues she develops even more elaborate stories, but she says to Stanley that women should ?(lay) ...read more.

?A serious play in which the chief character passes through a series of misfortunes leading to a final, devastating catastrophe.? The scene is made more dramatic by being extended, to prolong Blanche?s ordeal. Blanche is having a bath, again, to wash away the guilt and her past, and, ?The atmosphere of the kitchen is now the same raw, lurid one of the disastrous poker night.? which creates dramatic tension because the audience can sense, like Blanche, that something bad will happen. However, Blanche, being the self-centred person that she is, thinks that the reason everyone is sombre is her appearance, ?Is something wrong with me?? This is ironic because mentally there is something wrong with her. There is reference to her old life, ?I have always depended on the kindness of strangers? and Blanche shows that she trusts men over woman by doing what the doctor wants but not the matron. This is ironic because men have been the ones hurting her over the years, for example, she was in love with her husband and he was h********l, she has been used for s*x by soldiers and Stanley hasn?t been nice to her. Blanche shows how hurt she is by Stella and Stanley by ?(walking) on without turning.? 1517 words. ...read more.