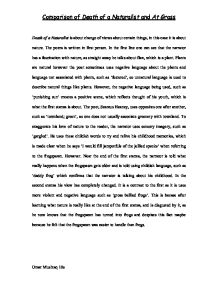 Discussing Death of a Naturalist and At Grass.

Death of a Naturalist is about change of views about certain things, in this case it is about nature. The poem is written in first person. In the first line one can see that the narrator has a fascination with nature, as straight away he talks about flax, which is a plant. Plants are natural however the poet sometimes uses negative language about the plants and language not associated with plants, such as 'festered', so unnatural language is used to describe natural things like plants. However, the negative language being used, such as 'punishing sun' creates a positive scene, which reflects thought of his youth, which is what the first stanza is about. The poet, Seamus Heaney, uses opposites one after another, such as 'townland; green', as one does not usually associate greenery with townland. To exaggerate his love of nature to the reader, the narrator uses sensory imagery, such as 'gargled'. ...read more.

From the title we can see that this poem may be about change as At Grass usually indicates redundancy. The poet uses many poetic devices to emphasize the subject of change and the hurt the horses feel because of the change from their previous glorious days. In the second line the two words 'shade' and 'shelter' both come consecutively and both begin with 'sh' which could imply the fact that they are now in the shadows of their former selves in the literal sense but metaphorically means that they may be ghost of their former selves. This alliteration also emphasises on silence and quietness of the horses now. On line five, there is good use of dashes, which demonstrate the abrupt end that came to the lives of the horses after they stopped racing which shows the quick change that the horses suffered in their lives. At the beginning of paragraph two, we become certain that the horses have had a change as the stanza begins with 'yet' signalling a change in time. ...read more.

In At Grass the horses are winning 'Cups and Stakes and Handicaps' but then all of a sudden they have reached retirement age and have as a result been made redundant, which is a quick change for them and they find it hard to deal with. The poet may well of used horses as a metaphor for himself as he may well have suffered something similar to that. So when developing the idea of change the poems are using the same idea but use different objects to portray their ideas. To convey the outcomes of the change, the poems are again different, as in Death of a Naturalist the narrator has completely changed his mind about nature and his view on nature as he used to enjoy it in his youth but as he came older his views changed. In At Grass the horses haven't changed their minds, but their surroundings and their everyday life has changed completely and they are unable to fit into the environment that they are now surrounded by. Comparison of Death of a Naturalist and At Grass Omar Mushtaq 10s ...read more.