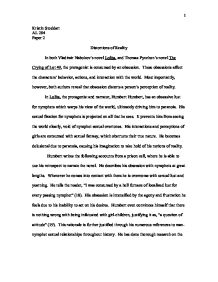 Distortions of Reality In both Vladimir Nabokov's novel Lolita, and Thomas Pynchon's novel The Crying of Lot 49, the protagonist is consumed by an obsession. These obsessions affect the characters' behavior, actions, and interaction with the world. Most importantly, however, both authors reveal that obsession distorts a person's perception of reality. In Lolita, the protagonist and narrator, Humbert Humbert, has an obsessive lust for nymphets which warps his view of the world, ultimately driving him to paranoia. His sexual fixation for nymphets is projected on all that he sees. It prevents him from seeing the world clearly, void of nymphet-sexual overtones. His interactions and perceptions of girls are consumed with sexual fantasy, which obstructs their true nature. He becomes delusional due to paranoia, causing his imagination to take hold of his notions of reality. Humbert writes the following accounts from a prison cell, where he is able to use his retrospect to narrate the novel. He describes his obsession with nymphets at great lengths. Whenever he comes into contact with them he is overcome with sexual lust and yearning. He tells the reader, "I was consumed by a hell furnace of localized lust for every passing nymphet" (18). His obsession is intensified by the agony and frustration he feels due to his inability to act on his desires. Humbert even convinces himself that there is nothing wrong with being infatuated with girl-children, justifying it as, "a question of attitude" (19). This rationale is further justified through his numerous references to man-nymphet sexual relationships throughout history. ...read more.

Humbert's obsession with Lolita causes him to recreate reality. He figuratively takes on the role of an artist. He says, "you have to be an artist and a madman" (17) in order to lust after nymphets. This aspect of his character is emphasized when Lolita shows him a picture of a surrealist painting in a magazine (58). Nabokov uses this allusion to refer to the surreal nature of Humbert's perception of Lolita. Humbert admits, "What I had madly possessed was not she, but my own creation" (62). He has molded his own image of Lolita in his mind, which has objectified and glorified her. His obsession with this figment of his imagination has clouded reality. Towards the end of the novel, Humbert's obsession with Lolita drives him to paranoia, a delusional state of reality. While he and Lolita are on a road-trip he is overcome with fear and suspicion that someone is following them in order to steal her away from him. He notices that a convertible has been following their trail, portraying the car as "that red ghost swimming and shivering with lust in my mirror" (217). This description is rich with word-plays, as the "red ghost" is a reference to Lolita, who has hedonistically haunted Humbert throughout the novel with her red lips, red nails, red apple, etc. The car "shivers with lust" in his mirror, just as his uncontrollable lust for Lolita is reflected like a mirror in his perception of his world. His paranoia is intensified when he pieces together a stream of suspicious episodes that validate his fear; strange car, strange phone call, strange man appearing and disappearing whenever he turns his back. ...read more.

Once again, the image of an obscured window reveals Oedipa's inability to see through her paranoia. She too has "trouble sorting the night into real and dreamed" (95). Pynchon was clearly aware of the similarities between Oedipa and Humbert, because he makes allusions to Lolita. When Oedipa takes her final trip to San Narciso, the hometown of Pierce Inverarity, she finds the hippie band The Paranoids singing a song that mentions "Humbert Humbert" (120). They are situated by the pool at Echo Courts Hotel. This scene is rich with symbolic language, a characteristic of Nabokov's writing as well. The name of the town and the hotel refer to Oedipa's infatuation with something that is a mere fabrication and reflection of her own mind. The pool that is next to The Paranoids as they play their song about Humbert reveals the lucidity of this moment. The second allusion to Lolita occurs as Oedipa looks over the city of San Fransisco and from "The high point of the bridge's arc, she saw smog. Haze, she corrected herself, is what it is, haze" (87). Pynchon makes a point of drawing attention to the haze by repeating it twice and distinguishing it from smog. Haze reflects the confusion and obscured vision that Oedipa sees the world through, which is similar to that of Humbert. Both Humbert Humbert and Oedipa Maas experience life from a level of separation due to the overwhelming nature of their obsessions. Their internal world is all that they are able to see, which is subsequently projected onto their external world. They have created their own realities, which they are unable to recognize as false. ?? ?? ?? ?? 1 ...read more.