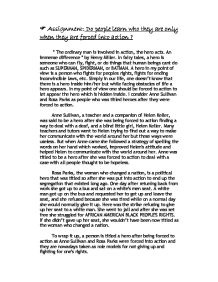 Do people learn who they are only when they are forced into action ?

? Assignment: Do people learn who they are only when they are forced into action ? " The ordinary man is involved in action, the hero acts. An immense difference " by Henry Miller. In fairy tales, a hero is someone who can fly, fight, or do things that human beings cant do such as SUPERMAN, SPIDERMAN, or BATMAN. A hero in my point of view is a person who fights for peoples rights, fights for ending inconvincible laws, etc. Simply in our life, one doesn't know that there is a hero inside him/her but while facing obstacles of life a hero appears. ...read more.

Many teachers and tutors went to Helen trying to find out a way to make her communicate with the world around her but these ways were useless. But when Anne came she followed a strategy of spelling the words on her hand which worked, improved Helen's attitude and helped Helen to communicate with the world around her. Anne was titled to be a hero after she was forced to action to deal with a case with all people thought to be hopeless. Rosa Parks, the woman who changed a nation, is a political hero that was titled so after she was put into action to end up the segregation that existed long ago. ...read more.

Here was the strike refusing to give up her seat to a white man. She went to jail and after she was set free she struggled for AFRICAN AMERICAN BLACK PEOPLE'S RIGHTS. If she didn't gave up her seat, she wouldn't have been now titled as the woman who changed a nation. To wrap it up, a person is titled a hero after being forced to action as Anne Sullivan and Rosa Parks were forced into action and they are nowadays taken as role models for not giving up and fighting for one's rights. ...read more.