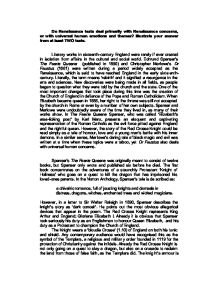 Do Renaissance texts deal primarily with Renaissance concerns, or with universal human emotions and themes? Illustrate your answer from at least TWO texts.

Do Renaissance texts deal primarily with Renaissance concerns, or with universal human emotions and themes? Illustrate your answer from at least TWO texts. Literary works in sixteenth-century England were rarely if ever created in isolation from affairs in the cultural and social world. Edmund Spenser's The Faerie Queene (published in 1590) and Christopher Marlowe's Dr Faustus (1601) were written during a period widely accepted as the Renaissance, which is said to have reached England in the early sixteenth-century. Literally, the term means 'rebirth' and it signified a resurgence in the arts and sciences. New discoveries were being made in all fields, as people began to question what they were told by the church and the state. One of the most important changes that took place during this time was the creation of the Church of England in defiance of the Pope and Roman Catholicism. When Elizabeth became queen in 1558, her right to the throne was still not accepted by the church in Rome or even by a number of her own subjects. Spenser and Marlowe were undoubtedly aware of the time they lived in, as many of their works show. In The Faerie Queene Spenser, who was called 'Elizabeth's a**e-licking poet' by Karl Marx, presents an eloquent and captivating representation of the Roman Catholic as the evil force pitted against England and the rightful queen. However, the story of the Red Crosse Knight could be read simply as a tale of honour, love and a young man's battle with his inner demons. ...read more.

is slandered as Duessa in The Faerie Queene. Soon after the first three books were published, Spenser was awarded a handsome pension of fifty pounds a year, and given lands in Ireland. It appears that the Queen appreciated his support in this popular poem. What else can be said about The Faerie Queene? I don't think it is just a collection of Protestant propaganda. On a lower level, it is an adventurous tale of love and honour, but I believe that this allegory has another, deeper meaning, concerning what makes a true man. In Spenser's Image of Nature, Cheney writes: [Spenser] provides graphic evidence that man must never permit his civilisation to render him incapable of defending himself against the enemies of that civilisation We must remember that although the knight may represent the Protestant's struggle, he is also an individual. After the Red-Crosse Knight has defeated the evil Errour, he goes on to battle other enemies, including the pagan warrior Sans Loy, or 'without law', Sans joy (without joy) and Orgoglio, representing pride. It's as if the knight must do battle with his own negative emotions to win his battle. In his letter to Raleigh, Spenser states that the main purpose of his poem is: 'To fashion a gentleman or noble person in virtuous and gentle discipline'. In other words, over the twelve stories that were to make up The Faerie Queene Spenser hoped to present the individual moral qualities that make up the perfect human being. ...read more.

They taught basic moral values that are still held in high regard today, like honesty and courage. The play is in essence, about a human being whose ambition and vision lead him to challenge the basic fundamental laws of the world around him. This type of story is common throughout literary history. If then, we ignore the historical context that Dr Faustus was written in, we can say it is a play dealing with human concerns, specifically with the common theme of man wanting more than is realistically possible. In Conclusion, it is obvious that both Christopher Marlowe and Edmund Spenser were aware of the situation and feeling in England at the time they wrote their works. At a time when literature was heavily censored by the state, it is unsurprising that they show, if only slightly, support for the current regime and the ideology it stood for. However, like any other story, the tales of Dr Faustus and the Red Crosse Knight must contain some sort of human theme, or they simply wouldn't be stories at all. Marlowe was eventually charged with heresy and blasphemy for his views, but was killed under dubious circumstances before the warrant could be executed. I think that most Renaissance texts deal with Renaissance concerns, but only because most authors at the time would find it impossible to ignore the world around them. Like stories from any age, Renaissance texts deal primarily with human emotions and themes. ...read more.