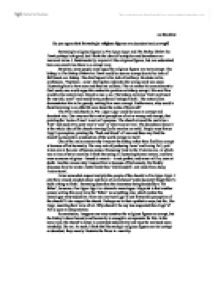 Do you agree that Brownings religious figures are decadent and corrupt?

Joe Stanford Do you agree that Browning's religious figures are decadent and corrupt? Browning's religious figures in Fra Lippo Lippi and The Bishop Orders his Tomb perhaps lack good, but I think the ideas of corruption and decadence are incorrect terms. I, fundamentally, respect all the religious figures, but can understand how one could view them in a corrupt way. However, some people may argue the religious figures are very corrupt. The bishop in The Bishop Orders his Tomb could be seen as corrupt due to his lack of fulfilment as a bishop. The chief aspect is his lack of celibacy. He states in his confession, 'Nephews - sons'; the hyphen indicates the wrong word was used, illustrating him to have sons and thus not celibate. ...read more.

One may see their entire perception of art as wrong and corrupt; that painting the 'souls of men' is not art's purpose. The church viewed the world as a 'blot' and used art to paint man's 'soul' or what was not real. The decadence about it is the whole idea of the church viewing God's creation as awful. People may favour Lippi's perception; painting the 'flesh and blood' of man and thus may find the church's pessimistic construction of the world corrupt in itself. One of the main reasons why I respect the bishop rather than find him corrupt is because of his humanity. The very acts of producing 'sons' and loving 'tall, pale' lovers are at the core of human nature. ...read more.

Browning describes the monastery being headed by a 'fat father', however, Fra Lippo Lippi is a dramatic monologue. My point is that another person writing this may view the 'father' as something else, which makes this monologue very subjective. How can one trust Lippi's less favourable perception of the church? I also respect the church. Perhaps not in their apathetic ways, but for, like Lippi, asserting their view of art. Why should it be any less respected than Lippi's? Art is open to interpretation. In conclusion, I suppose one may construe the religious figures as corrupt, but the bishop's sheer honesty and humanity is enough to compensate for this. In the same way, the church's nature is conveyed subjectively and must be analysed open-mindedly; like art. As such, I think that Browning's religious figures are not corrupt or decadent, they merely illustrate the flaws in morality. ...read more.