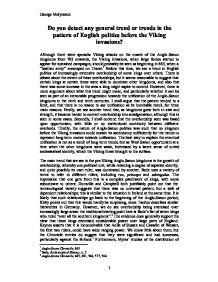 Do you detect any general trend or trends in the pattern of English politics before the Viking invasions?

Do you detect any general trend or trends in the pattern of English politics before the Viking invasions? Although there were sporadic Viking attacks on the coasts of the Anglo-Saxon kingdoms from 793 onwards, the Viking invasions, when large forces started to appear for sustained campaigns, should probably be seen as beginning in 865, when a "heathen army" encamped on Thanet.1 Before this time, we see a trend in English politics of increasingly extensive overlordship of some kings over others. There is debate about the extent of these overlordships, but it seems reasonable to suggest that certain kings at certain times were able to dominate other kingdoms, and also that there was some increase in the area a king might aspire to control. However, there is more argument about what this trend might mean, and particularly whether it can be seen as part of an inexorable progression towards the unification of the Anglo-Saxon kingdoms in the ninth and tenth centuries. I shall argue that the pattern tended to a limit, and that there is no reason to see unification as its inevitable result, for three main reasons. Firstly, we see another trend that, as kingdoms grew both in size and strength, it became harder to convert overlordship into amalgamation, although this is seen in some cases. Secondly, I shall contend that the overlordship seen was based upon opportunism, with little or no institutional continuity between different overlords. Thirdly, the nature of Anglo-Saxon politics was such that no kingdom before the Viking invasions could sustain its ascendancy sufficiently for the trends to represent long-term moves towards unification. The best way to explain the eventual unification is not as a result of long-term trends, but as West Saxon opportunism at a time when the other kingdoms were weak, buttressed by a latent sense of united ecclesiastical identity, which the Viking threat brought to the surface. ...read more.

Ceawlin, could aspire to rule much of the land south of the Humber, but nothing like as much as the later Mercians and Egbert. This trend was not relentless: in the period between Offa and Egbert, there is little evidence of comprehensive overlordship on the scale of either of these rulers. Although we observe this trend towards the formation of more extensive overlordships, we should not conclude, as Stenton and John do, that this trend could be extrapolated to encompass the unification of the Anglo-Saxon kingdoms. In the first place, it seems to have been increasingly difficult to convert overlordship into the actual amalgamation of kingdoms. Initially, with small kingdoms, it may not have been unduly difficult to effect such assimilation: Yorke points out that East Kent seems to have consumed West Kent sometime during the sixth century. Indeed, much amalgamation probably occurred in the sixth century, before the various kingdoms that we see emerged. Furthermore, it was often possible for a larger kingdom to digest a smaller one: this is seen in the cases of Deira (eventually subsumed into Bernicia after 651) and the Hwicce (gradually divested of independence by Mercia in the eighth century). However, integration was not always smooth: despite being united under Aethelfrith and Edwin, Deira was ruled separately under Oswine from 642 until 651. In the latter part of the pre-Viking period, it would have been very difficult for one of the greater kingdoms to consume another permanently: this is suggested by the fact that, despite their struggles and periods of subjection to one another, Northumbria, East Anglia, Mercia and Wessex all survived until the Viking onslaught. An illustration of this difficulty is the case of Mercia: Oswiu of Northumbria was only able to rule Mercia directly for three years after his victory in 655; he was driven out by the Mercian ealdormen in 658. Similarly, Egbert's domination of Mercia was not secure: he was recognised as king by the Mercians in 829 but Wiglaf was restored in 830. ...read more.

However, dynastic tension was generally a feature of the pre-Viking period: this contributed to the rapid rise and fall of kingdoms, meaning that overlordship could not consolidate into unification. We do therefore see a trend towards greater overlordships in this period, though it must be noted that this trend was gradual and not entirely linear. Nevertheless, it is clear that certain kings were able to exert influence over far larger areas just before the Viking invasions than others could at the beginning of the Anglo-Saxon period. However, it would be unwise to extrapolate this trend and interpret it as some kind of progression towards the eventual unification of the Anglo-Saxon kingdoms under the West Saxons. It became harder to translate overlordship into political amalgamation as kingdoms grew, and overlordship was not itself stable, given the internal vicissitudes of kingdoms. We see that, before the later ninth and tenth centuries, no kingdom could sustain overlordship for long and, in the absence of recognised institutions of overlordship, this meant that whatever progress might conceivably have been made towards unification under one overlord was lost when his kingdom's power waned. The rise of Wessex was predicated upon factors that mostly could not have been foreseen: it was able to take advantage of the weakness of the other English kingdoms in the wake of the Viking attacks and could exploit the latent sense of religious unity, which was probably made stronger by the common, external, pagan threat. Bassett's extended metaphor of a knockout football competition, which inevitably produces a single winner, is not particularly apposite; while we might nowadays modify Kemble's nineteenth century allusions (he described overlordship as "a mere fluctuating superiority such as we may find in Hawaii, Tahiti or New Zealand, due to success in war and lost in turn by defeat"35), his basic conclusion, that the overlordships that we see in the pre-Viking Anglo-Saxon kingdoms were not leading inexorably towards unification, still seems entirely reasonable. ...read more.