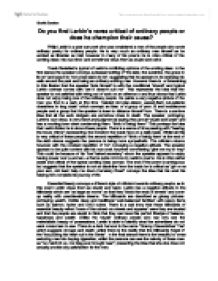 Do you find Larkins verse critical of ordinary people or does he champion their cause?

Do you find Larkin's verse critical of ordinary people or does he champion their cause? Philip Larkin is a post war poet who was considered a man of the people who wrote ordinary poetry for ordinary people. He is very much an ordinary man himself as he worked as librarian as Hull; however in many of his poems he is often critical of the working class- his own kind- and sometimes views them as stupid and naive. Toads Revisited is typical of Larkin's conflicting opinions of the working class. In the first stanza the speaker conveys a pleasant setting of "the lake, the sunshine, the grass to lie on" and says it is "not a bad place to be"; suggesting that he appears to be enjoying his walk around the park and being an ordinary working man. However there is a forewarning to this illusion that the speaker finds himself in with the conditional "should" and typical Larkin contrast comes with "yet it doesn't suit me". ...read more.

He is often rather sexist and critical of the typical working class woman. The end of the poem is ambiguous but suggests that the speaker is not so dissimilar from the toads he is critical as "give me your arm, old toad; help me down Cemetery Road" conveys the idea that his work his helping him complete his journey of life. Essential Beauty conveys a different style of criticism towards ordinary people; as in this poem Larkin views them as stupid and naive. Larkin has a negative attitude to the billboards which are "as large as rooms" so that they "block the ends of streets" and cover up reality with unachievable dreams. The billboards are described as glossy pictures portraying wealth, middle class and traditional "well-balanced families" with luxury items such as salmon, butter and OXO cubes. There is a sad irony that these billboards of essential beauty reflect "none of the rained-on streets and squares" were they are located and that the people are stupid to think that they can have this perfect lifestyle of balance, happiness and wealth. ...read more.

He is rather stereotypical of the types of customers saying they "leave at dawn low terraced houses" and that they all have blue collar manual labour jobs. Once again Larkin is especially harsh about women and these constant sexist remarks may reflect his own life in which he was unlucky in love. He shows them as aspiring to be of a higher class by wearing colourful clothes although it is made clear that they are "machine embroidered, thin as blouses" and therefore a cheap imitation of the real thing. The speaker believes that these naive young women are living in a fantasy world saying "to suppose they share that world" with the wealthier middle and upper classes. There is emphasis on "their sort" to show that Larkin is distancing himself from these people. In conclusion, these poems give the overall impression that Larkin is critical of the ordinary person and barely makes the effort to champion their cause. It is strange considering that he is an ordinary man himself and perhaps his criticism also extends to himself and he is dissatisfied with his own life. Charlie Dowden Charlie Dowden ...read more.