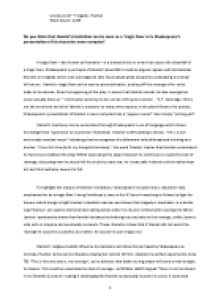 Do you think that Hamlets hesitation can be seen as a tragic flaw or is Shakespeares presentation of his character more complex?

﻿Literature AS ? Tragedy - Hamlet Word Count: 1,245 Do you think that Hamlet?s hesitation can be seen as a ?tragic flaw? or is Shakespeare?s presentation of his character more complex? A tragic flaw ? also known as Hamartia ? is a characteristic or error that causes the downfall of a tragic hero. Shakespeare?s portrayal of Hamlet?s downfall it could be argued, agrees with Aristotelian theories on tragedy which sees a protagonist who has enjoyed great prosperity undergoing a reversal of fortune. Hamlet?s tragic flaw can be seen as procrastination, putting off the revenge of his uncle leads to his demise. Near the beginning of the play, it seems that Hamlet intends to take revenge but never actually does so ? ?continually resolving to do, yet do nothing but resolve...? S.T. Coleridge. This is not the be all and end all of Hamlet?s character as many other aspects in the play influence his actions; Shakespeare?s presentation of Hamlet is more complex than a ?pigeon-livered? man simply ?lacking gall?. Hamlet?s hesitancy can be understood through Shakespeare?s use of language which shows his change from ?ignorance to awareness? (Aristotle). Hamlet?s self-loathing is shown, ?Yet I, a dull and muddy-mettled rascal? indicating that he recognises his deferment and philosophical thinking as a burden. ...read more.

Although his tragic flaw is seen here as hesitation, the audience can empathise with his loss and can understand why he would want to wait and take revenge on his uncle properly. This does not however justify why he has not completed the revenge earlier and forebodes tragedy as Hamlet wastes more time. Hamlet?s obsession with putting on an antic disposition can be seen as an aspect of his procrastination; however the audience suspect that it is deeper and becoming part of his complex character. We are warned of Hamlet?s lunacy at the start of the play, Act 1 Scene 5 ?to put antic disposition on.? It is plausible to suggest that Hamlet may have exaggerated his madness after the sudden death of his father and allow time to plot his revenge. Polonius asks Hamlet if he will walk out of the air (outside) and Hamlet replies, ?Into my grave?? relating to the suicide that Hamlet has been speaking about and shows he is mad in craft and knows what he is doing. Ophelia?s report of Hamlet in Act 2 scene 1, ?Lord Hamlet? pale as a shirt? knees knocking each other? shows her speech is split into short sections suggesting she is speaking quickly and is fearful. ...read more.

Freud?s Oedipus complex could be seen to help explain Hamlet?s rage towards his mother which would be another facet of his more complex character. Before Hamlet knows that Claudius has murdered his father he is angry at him for marrying his mother and describes him as ?rank and gross?. At first, Shakespeare shows Hamlet as angry at the speed of their marriage; ?The funeral bak?d meats did coldly furnish forth the marriage tables?. Despite this, Hamlet?s feelings of anger towards his mother could be interpreted as Oedipal. He often refers to the ?incestuous sheets? and ?enseamed bed? in which Gertrude and Claudius make love which could suggest sexual jealousy towards the pair. The word incestuous shows Hamlet?s true disgust in their relationship. To conclude, Shakespeare?s presentation of Hamlet is highly complex, for example his incapability to move on, religious influence and his good nature. Obsession over his antic disposition and anger at himself leads Hamlet off course, foreboding his demise as he loses his reasoning and leaves time for Claudius to plot his death. Although written in the form of a classical tragedy, Shakespeare?s portrayal of Hamlet?s tragic flaw can be seen as complex which is found in more modern tragedies. Hamlet?s intricacy forces the audience to interpret events; it creates realism and evokes catharsis amongst the audience as nobody has just one flaw. ...read more.