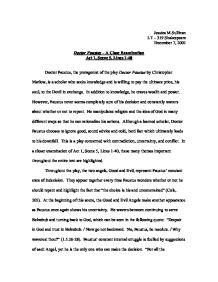 Jessica M Sullivan LT - 319 Shakespeare December 7, 2001 Doctor Faustus - A Close Examination Act 1, Scene 5, Lines 1-40 Doctor Faustus, the protagonist of the play Doctor Faustus by Christopher Marlow, is a scholar who seeks knowledge and is willing to pay the ultimate price, his soul, to the Devil in exchange. In addition to knowledge, he craves wealth and power. However, Faustus never seems completely sure of his decision and constantly wavers about whether or not to repent. He manipulates religion and the idea of God in many different ways so that he can rationalize his actions. Although a learned scholar, Doctor Faustus chooses to ignore good, sound advice and cold, hard fact which ultimately leads to his downfall. This is a play concerned with contradiction, uncertainty, and conflict. In a closer examination of Act 1, Scene 5, Lines 1-40, these many themes important throughout the entire text are highlighted. Throughout the play, the two angels, Good and Evil, represent Faustus' constant state of indecision. ...read more.

/ Why, the signiory of Emden shall be mine" (1.5.22-23). Throughout the entire play, Faustus continually refers to himself in the third person. In the examined lines of Act 1, Scene 5, he does so four times. The first two times Faustus refers to himself in this manner are in lines one and nine. This suggests uncertainty as he mills over whether or not to turn back to God in his head. "Now, Faustus, must thou needs be damned? / And canst thou not be saved?" he questions in his soliloquy. By addressing himself in the third person, Faustus is trying to convince himself to choose a course of action. However, after the Evil Angel has easily convinced Faustus to pursue his dreams of wealth and power with Mephostophilis, his tome changes rapidly. Rather than questioning his actions, Faustus becomes very confident in his choices. He feels invisible with the devil by his side saying, "When Mephostophilis shall stand by me, / What God can hurt thee, Faustus? ...read more.

Faustus' logical shortcomings are emphasized by his inability to understand that if h**l exists, as Mephostophilis tells him, then God's heaven must also be attainable. If heaven is an unattainable goal, how can one define h**l, as evil can only be defined in the context of good? In conclusion, Doctor Faustus' quest for wealth, power, and knowledge ultimately lead to his demise. He chose to ignore the advice of so many and only listen to the words of those who say what he wants to hear. The Good and Evil Angel represent the two paths of life Faustus could follow, but it is as if the Good Angel says nothing to him because that is what he hears. Alike, Faustus chooses to manipulate the idea of religion and God to conform to his own wants and needs. He picks and chooses which facts to pay attention, therefore, discrediting himself and his ideas. A man who craved prosperity and high reputation, Doctor Faustus became too greedy and let his desires blind him to obvious irrationalities leading to his downfall. ?? ?? ?? ?? 2 ...read more.