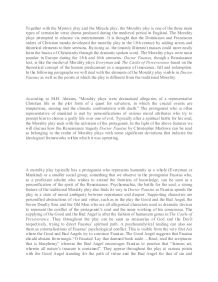 Doctor Faustus -a morality play? we will discuss how the Renaissance tragedy Doctor Faustus by Christopher Marlowe can be read as belonging to the realm of Morality plays with some significant deviations that indicate the ideological frameworks within whi

Together with the Mystery play and the Miracle play, the Morality play is one of the three main types of vernacular verse drama produced during the medieval period in England. The Morality plays attempted to educate via entertainment. It is thought that the Dominican and Franciscan orders of Christian monks developed the morality play in the 13th century by adding actors and theatrical elements to their sermons. By doing so, the (mainly illiterate) masses could more easily learn the basics of Christianity through the dramatic spoken word. The Morality plays were most popular in Europe during the 15th and 16th centuries. Doctor Faustus, though a Renaissance text, is like the medieval Morality plays Everyman and The Castle of Perseverance based on the theoretical concept of the human predicament as a sequence of innocence, fall and redemption. In the following paragraphs we will deal with the elements of the Morality play visible in Doctor Faustus as well as the points at which the play is different from the traditional Morality. According to M.H. Abrams, "Morality plays were dramatized allegories of a representative Christian life in the plot form of a quest for salvation, in which the crucial events are temptations, sinning and the climatic confrontation with death." ...read more.

The epilogue suggests this-"Cut is the branch that might have grown full straight..." Even the Old Man in Act 5 provides guidance to Faustus -"O gentle Faustus, leave this damned art...do not persevere in it like a devil..." Also,"the morality agents of temptation are vestigally represented in Doctor Faustus by the conjurors Valdes and Cornelius who lure Faustus to necromantic studies-and as quickly disappear" as noted by Robert A. Potter. The chief aim of the morality play was didactic. It was a dramatized guide to Christian living and Christian dieing. Whosoever discards the path of virtue and faith in God as well as Christ is destined to despair and eternal damnation-this can be taken to be the overt message of Marlowe's Doctor Faustus. And it has found the most touching expression in the closing lines of the play which warns against the pursuit of illegitimate forms of knowledge- "whose deepness doth entice such forward wits, to practice more than the heavenly power permits". It is this reason why Hudson had rightly said-"No finer sermon then Marlowe's Doctor Faustus ever came from the pulpit." New Historicist readings however suggest that this supposedly overt cautionary Christian message may be a decoy to escape Puritan censorship. According to this perspective, the play can also be read as the atheist and nonconformist Marlowe's critique of the regressive social and religious forces in the Renaissance world that inhibited and attempted to contain the purveyors of radical social or ideological change. ...read more.

He falls from high to low and this is clear in his last soliloquy-"O soul, be changed into little water drops, And fall into ocean never to be found". The colonial vocabulary that couches these aspirations locates this text in the world of the Renaissance characterised by pervasive change and ideological shifts. The contradictions of the age in the realm of scholarship (medieval scholasticism vs. Renaissance humanism) and in religion (Catholicism vs Protestantism and Free-will vs. Calvinistic Predestination) are mapped in this play by juxtaposing elements of the Morality play and the humanistic tragedy in terms that are ambiguous and open to both conservative and radical readings. Finally, unlike the morality plays where the moral is always positive and the goodness always triumphs over evil, truth over lies, and virtue over vice, the end is tragic, but just. There is no other fair outcome to his actions. The end of the play brings a process of catharsis for the audience, as our pity and fear for Faustus is released when we see justice being done, a typical tragic convention. Thus, Marlowe's Doctor Faustus is "a Morality play with a difference" as it negates, to an extent, the typical notions of a Morality play. Hence, we can conclude by agreeing with Nicholas Brooke who states-"I believe that Marlowe's adoption of Morality form must be seen as a deliberate mis-use of popular old-fashioned material" ...read more.