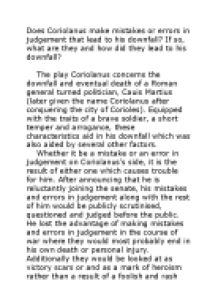 ﻿Does Coriolanus make mistakes or errors in judgement that lead to his downfall? If so, what are they and how did they lead to his downfall? The play Coriolanus concerns the downfall and eventual death of a Roman general turned politician, Cauis Martius (later given the name Coriolanus after conquering the city of Corioles). Equipped with the traits of a brave soldier, a short temper and arrogance, these characteristics aid in his downfall which was also aided by several other factors. Whether it be a mistake or an error in judgement on Coriolanus's side, it is the result of either one which causes trouble for him. After announcing that he is reluctantly joining the senate, his mistakes and errors in judgement along with the rest of him would be publicly scrutinised, questioned and judged before the public. He lost the advantage of making mistakes and errors in judgement in the course of war where they would most probably end in his own death or personal injury. ...read more.

Going against his wishes to satisfy her wish for him to fight for his place in the consul by humiliating himself further; apologising to the plebeians. She, (Volumnia) says to Coriolanus, 'To beg of thee is more my dishonour than thou of them?'. She gives up and plays the role of the disappointed mother and Coriolanus caves in. 'Prithee mother, pray be content? chide me no more?' Though he would certainly be aware that listening to his mother was a mistake if her were not so dependent on her approbations and love. Though not a clear cut mistake, it certainly aided in his downfall. Coriolanus certainly obtains some time away from the influences of people when he is banished. He arrives at Antium, where he is prepared to die at Aufidius hands for all the harm he has done, 'If he slay me, He does fair justice?'. Though he goes on to say, 'if he give me way, I'll do his country service.' he switches his allegiances to Aufidius. ...read more.

The signing of the peace treaty with Rome pushed him into being a traitor in Aufidius eyes and those of Antium. After a heated verbal confrontation between Coriolanus, Aufidius and his conspirators, Coriolanus is killed. It is fair to say that Coriolanus's actions affect the most influential people in his life, and events. His being a good obedient son to a domineering, persuasive mother lead him to the event that highlights his flaws as his primary characteristics; the event being running for consulship. His inability and refusal to veil his hatred for the plebeians who are so easily influenced lead to his banishment. In the end, in him 'playing the man am I am' a great soldier, prompted envious and jealous feelings in his ally who later did not need much to kill him. Coriolanus's mistakes and errors in judgment were all leading to his eventual death due to him being governed by negative people, like his mother. Also negative emotions; his arrogance, and pride which refused and was unable to control due to his nature of seeking pleasure in violence, anger and was in full accordance of his warped upbringing by his war-hungry mother who has only projected maternal sense. ...read more.