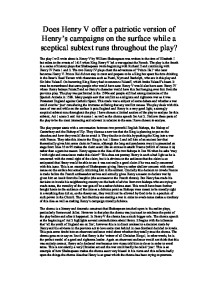 Does Henry V offer a patriotic version of Henry's campaigns on the surface while a sceptical subtext runs throughout the play?

Does Henry V offer a patriotic version of Henry's campaigns on the surface while a sceptical subtext runs throughout the play? The play I will write about is Henry V by William Shakespeare was written in the time of Elizabeth I but refers to the events of 1415 when King Henry V led a war against the French. The play is the fourth in a series of history plays that Shakespeare wrote beginning with Richard II and continuing with Henry IV Parts 1 and 2. The two Henry IV plays chart the adventures of 'Prince Hal' who later becomes Henry V. Prince Hal did not stay in court and prepare to be a King but spent his time drinking in the Boar's Head Tavern with characters such as Pistol, Nym and Bardolph, who are in this play and Sir John Falstaff. On becoming King Henry had to renounce Falstaff, which broke Falstaff's heart. It must be remembered that some people who would have seen Henry V would also have seen Henry IV where Henry betrays Falstaff and so Henry's character would have this fact hanging over him from the previous play. The play was performed in the 1590s and people still had strong memories of the Spanish Armada in 1588. Many people saw that conflict as a religious and righteous war as it was Protestant England against Catholic Spain. ...read more.

Many of the phrases in this chorus speech seem very patriotic and complimentary to Henry on one level, as the phrases I have focused on above show. However, if a thoughtful audience compares the information from this with that presented elsewhere in the play then many of the phrases put Henry in not so good a light. Act 4 Scene 1 is a very interesting scene; it starts with the King discussing the impending Battle with the Lords of England. Henry then borrows a cloak from one his advisors and goes about the camp in disguise so he can learn the mood of his soldiers on the eve of a battle that many expect will see all the English die at the hands of the French. The chorus refers to this in his Act 4 speech, he says 'Proud of their numbers and secure in soul the confident and over-lusty French do the low-rated English play at dice.' These few lines in the chorus speech say that the French are rolling dice on how long the English will last, Shakespeare also refers to the French as 'over lusty' and this means that the French are almost too eager to go into battle and so these lines also serve to give the impression that the French are over-confident which would please a patriotic English audience. ...read more.

The play also deals with the morality of war and while on the surface it paints a very patriotic and glorious conclusion about Henry's French campaign the subtext for many scenes is dubious about how moral the war actually was. Apart from the obvious fact that the play made Henry seem as if he was going to war because two bishops wanted to avoid paying taxes the play also attacks the morality of war and Shakespeare may have been trying to signal that any war for whatever reason cannot be just as it causes immense suffering on both sides. This would clash with the accepted view of the conflict with Spain and the Spanish Armada, this was generally accepted to be a holy war (Protestant England against Catholic Spain) and it could not be faulted. Because the play raises these issues much of the criticism of Henry and his war is not openly written about but rather covered by the patriotic chorus. However Shakespeare actually uses the chorus speeches to encourage the audience not to trust the chorus and some of the chorus' words plainly contradict actions in the play. This creates a play that anybody reading or watching is encouraged to think about and see the many different meaning s of the text and think about whether war is actually so great, probably exactly what Shakespeare intended. ...read more.