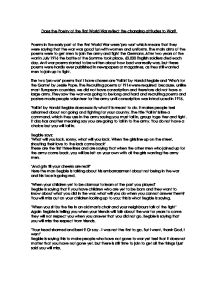 Does the Poetry of the First World War reflect the changing attitudes to War?

Does the Poetry of the First World War reflect the changing attitudes to War? Poems in the early part of the First World War were 'pro war' which means that they were saying that the war was good fun with women and uniforms. The main aims of the poems were to get men to join the army and fight the Germans. After two years of the war in July 1916 the battle of the Somme took place, 60,000 English soldiers died each day. Anti war poems started to be written about how bad war really was, but these poems were hardly ever published in newspapers or magazines, as they still wanted men to join up to fight. The two 'pro war' poems that I have chosen are 'Fall In' by Harold Begbie and 'Who's for the Game' by Jessie Pope. The Recruiting poems of 1914 were required because, unlike most European countries, we did not have conscription and therefore did not have a large army. They saw the war was going to be long and hard and recruiting poems and posters made people volunteer for the army until conscription was introduced in 1916. 'Fall In' by Harold Begbie does exactly what it is meant to do. It makes people feel ashamed about not going and fighting for your country. The title 'Fall In' is like a command, which they use in the army saying you must fall in, group together and fight. It also has another meaning say you are going to fall in to the army. You do not have a choice but you will fall in. Begbie says: "What will you lack, sonny, what will you lack. When the girls line up on the street, shouting their love to the lads come back" These are the first three lines and are saying that when the other men who joined up for the army come back, you will be left on your own with all the girls wanting the army men. ...read more.

Owen says "Gas! GAS! Quick boys!" The men have just woken up they are still half-asleep the first sign of "Gas" is in lower case as they have just seen what going on. The second "GAS" is the man shouting for their lives as they try to find their gas masks. "Dim through the misty panes and thick green light, as under a green sea, I saw him drowning" The green light Owen talks about is the gas falling down on them. Owen uses a simile saying that the man is drowning in a green sea, which he means by the colour of the gas looking like the sea. The reality is that the man is drowning, when a gas attack takes place, the lungs fill up with fluid and drown on your own bodily fluids. "The ecstasy of fumbling" Owen does not mean that there is an adrenaline rush. But medically it means a morbid state of nerves, which means that your nerves are making you think of one thing to do, which in this case, is to put your gas masks on. "Fitting the clumsy helmets..." Owen is either saying that the men are clumsy in putting the helmets on or the helmets clumsy by letting the gas in. Owen tells us how this memory has stayed with him. The sight of a dying man lunging at him in a plea for his life. In the short 3rd stanza, Owen seems to have a great fear of the gas attacks when he talks of them. Owen talks of all of the nightmares he has had because of the war and this event. Owen says " In all my dreams before my helpless sight" Owen is dreaming about that man, which was dying before him Owen dreams about it because there was no way in which he could help him. The 4th stanza is back to the slow pace of the 1st stanza. ...read more.

Each of the two poems makes a statement. One difference between the poems is that Dulce Est is a view on the army that concerns a whole array of the army. With Disabled it is just a description of the pain of one person. One thing that I feel both poems have in common is that they both talk about how they were lied to and how they were sold a lie. This is true, If a person wanted an example of army life at it's worst then I would show them Dulce ET Decorum. However if I was asked about a poem that describes a poem where a person can see how the war affected people. II would recommend the latter 'Disabled' is in my opinion the most moving of the stories as it represents a man's struggle for his life. This man can offer nothing to his country now. He can't even offer himself something that he feels will make his staying alive worth it. Whilst the majority of the people in Dulce Et are still alive this man's soul, has in effect died. He has lost his colour and can't get used to the fact that he is unpopular. I find Dulce Et Decorum to be the more shocking of the two poems. My reasons are as follows, although Disabled is a very moving and powerful poem in it's own right, it only describes the view of one person in the army. I think that what makes Dulce Et so powerful is that Owen speaks for the masses in the army when he talks of the daily horrifying sights and regular attempts by the Germans to gas them. Reading these poems can enlighten a person. Many people say that they live stressful lives and are under extreme pressure. If you think of what these young men must have gone through it can put a lot of things in to perspective. Day in day out these men had to have the weight of a nation on their shoulders this is before they have to dodge land mines and gas attacks. ...read more.