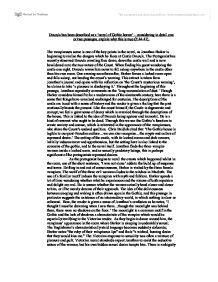 Dracula has been described as a novel of Gothic horror(TM) &quot; considering in detail one or two passages, explain why this is true (P.44-47).

Dracula has been described as a 'novel of Gothic horror' - considering in detail one or two passages, explain why this is true (P.44-47). The vampiresses scene is one of the key points in the novel, as Jonathan Harker is beginning to realise the dangers which he faces at Castle Dracula. The Protagonist has recently observed Dracula crawling face down, down the castle wall and is now bewildered as to the true nature of the Count. When finding his guest wandering the castle one night, Dracula warns him never to fall asleep anywhere in the castle other than his own room. One evening soon thereafter, Harker forces a locked room open and falls asleep, not heeding the count's warning. This extract is taken from Jonathan's journal and opens with his reflection on 'the Count's mysterious warning'; he claims to take 'a pleasure in disobeying it.' Throughout the beginning of this passage, Jonathan repeatedly comments on the 'long accumulation of dust.' Though Harker considers himself to be a modern man of the nineteenth century, here there is a sense that things have remained unchanged for centuries. The descriptions of the castle are laced with a sense of history and the reader is given a feeling that the past continually haunts the present. ...read more.

The moonlight is a common motif in the Gothic and the lack of shadows a characteristic of the vampire which would be especially terrifying to the Victorian reader. As they begin to dance around him, the vampiress' appearance in the room where Harker is sleeping is undeniably s****l. The Englishman's characteristically staid language becomes suddenly elaborate; Harker notes "the ruby of their voluptuous lips" and feels "a wicked, burning desire that they would kiss me." The Victorian response to sexuality was often a mixture of pleasure and guilt. Victorian moral standards expect Jonathan to resist the seductive nature of the women, but his own hidden s****l desire tempts him. There is ambiguity in the language which surrounds them, there is a somewhat paradoxical and contradictorary quality about them. This is reflected in language such as 'a silvery, musical laugh...but as hard...a sound could never have come through the softness of human lips.' When describing the women, Harker also mentions that the women have a bitter-sweet air about them, 'There was a deliberate voluptuousness which was both thrilling and repulsive.' It becomes apparent to the reader that the protagonist is simultaneously confronting a vampire and another creature equally terrifying to Victorian England: an unabashedly s****l woman. ...read more.

In order to send them away, Dracula presents his three brides with a potato sack containing a newborn baby for them to feast on. The women close in on the bag like wild animals, at the sight of this, Jonathan is 'aghast with horror'. He recalls hearing 'a gasp and a low wail.' This incident shows a distinct lack of maternal instinct on behalf of the vampiresses, which can be read as a link to some of Darwin's ideas. In his 'Origin of the Species', he puts forward some ideas about the 'survival of the fittest', which link to Dracula's brides as 'Darwinian Types'. They are predatory, cruel, bent on the fulfilment of their own s****l desires, and most notably, they deny their maternal instinct in the race for survival. As the passage ends, we are reminded that the Gothic is preoccupied with death. Our fascination with the genre reflects our own desire for death, which Freud calls 'Thanatos.' The chapter ends with a dramatic final sentence, leaving the reader in suspense; 'then horror overcame me, and I sank down unconscious.' The very word unconscious reminds us about the theme of dreams and reality, which once again, is a vital aspect of the Gothic. Overall, this passage is a clear indication that Bram Stoker's Dracula is undeniably a novel of Gothic horror. ...read more.