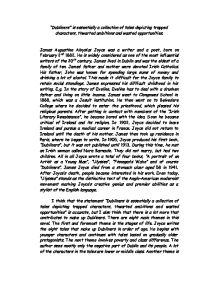 "Dubliners" is essentially a collection of tales depicting trapped characters, thwarted ambitions and wasted opportunities. James Augustine Aloysius Joyce was a writer and a poet, born on February 2nd 1882. He is widely considered as one of the most influential writers of the 20th century. James lived in Dublin and was the eldest of a family of ten. James' father and mother were devoted Irish Catholics. His father, John was known for spending large sums of money and drinking a lot of alcohol. This made it difficult for the Joyce family to retain social standings. James expressed his difficult childhood in his writing. E.g. In the story of Eveline, Eveline has to deal with a drunken father and living on little income. James went to Clongowes School in 1888, which was a Jesuit institution. He then went on to Belvedere College where he decided to enter the priesthood, which pleased his religious parents. After getting in contact with members of the "Irish Literary Renaissance", he became bored with the idea. Soon he became critical of Ireland and its religion. In 1902, Joyce decided to leave Ireland and pursue a medical career in France. Joyce did not return to Ireland until the death of his mother. James then took up residence in Paris, where he began to write. ...read more.

When the boys meet the strange man, they do not recognise the danger of him. Araby is a short story about a boy from a poor family, who hopes to win over a girl's affection by buying her a gift from a bazaar. When he goes to the bazaar, he finds nothing but frustration because they are about to close. The main themes that the story explores are defeat, alcoholism, isolation and paralysis. As the boy waits his uncle's return from the pub, so that he can go to the bazaar, the reader feels fear of defeat building. There are lots of hurdles the boy has to overcome to get to the bazaar before closing time. His fear of defeat and isolation increases even more when he finds that many of the items are too expensive (this highlights poverty). Paralysis is felt when he has no idea what is going to become of his relationship with the girl. The difficulty at the bazaar is a symbol of the difficulty there is in the adult world, in which the boy cannot navigate. This story is similar to the point in Joyce's life when he had just begun to establish his life as an adult, coping with fear of poverty, isolation and longing to escape. Eveline is a story about a nineteen-year-old girl. ...read more.

The major part of mortality is the death of Gretta's first love. The separation of the dead becomes a separation for the living. Joyce joins the themes of mortality and isolation together. Gabriel feels like he is already dead although he is just living in isolation. I strongly agree that Dubliners is a collection of tales with trapped characters, thwarted ambitions and wasted opportunities. In the stories that I have discussed, I have attempted to highlight these areas. In each of the stories however, I do feel that Eveline reflects these themes most strongly. The main character in Eveline seems trapped because of her family's dependency on her. She harbours ambitions of going to Argentina and wastes the opportunities of love, wealth, happiness and a new beginning. In Araby, the main character appears trapped due to poverty. He is too young to do anything about this. The main characters ambition is to buy a gift for a girl that he is fond of. He wastes an opportunity to build a relationship with the girl. An Encounter has a similar theme with trapped characters with that the characters are trapped by youth. The boys did not reach their ambition to get to the pigeon house. The boys had an opportunity to get away from the strange old man but they wasted it. In The Dead, there is emphasis on wasted opportunities, the main one being Michael Furey dying for Gretta and characters approaching death. 1,747 words ...read more.