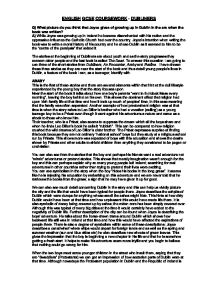 DUBLINERS - What picture do you think that Joyce gives of growing up in Dublin in the era when the book was written?

ENGLISH GCSE COURSEWORK - DUBLINERS Q) What picture do you think that Joyce gives of growing up in Dublin in the era when the book was written? A) While Joyce was growing up in Ireland he became disenchanted with his nation and the oppressive influence the Catholic Church had over the country. Joyce's intention when writing the book was to write a moral history of his country and he chose Dublin as it seemed to him to be the "centre of the paralysis" that seized it. The stories at the beginning of Dubliners are about youth and as the story progresses they concern older people and the last book is called The Dead. To answer this question I am going to use three of the short stories from Dubliners; An Encounter, Araby and Eveline. I have chosen these three stories as they are near the start of the book and thus detail young people's lives in Dublin, a feature of the book I can, as a teenager, identify with. ARABY This is the first of these stories and there are several elements within that hint at the dull lifestyle experienced by the young boy that the story focuses upon. Near the start of the book it talks about how one boy's parents "went to 8 o'clock Mass every morning", leaving the boy behind on his own. This shows the dominant effect that religion had upon Irish family life at that time and how it took up much of peoples' time, in this case meaning that the family was often separated. Another example of how predominant religion was at that time is when the story refers to Leo Dillon's brother who had a vocation (calling) as a young teenage boy to be a Priest even though it went against his adventurous nature and came as a shock to those who knew him. Their teacher, who is a Priest, also seems to suppress the dream which all the boys share and when he finds Leo Dillon's book he calls it "rubbish". ...read more.

He refers to her in an exalted religious language - his dream of her is like a chalice (communion cup) that he carries everywhere. He says that she plays "music on the heart strings of his body". He even prays to her when he can't picture her as vividly in his mind as he would like and he does this by "pressing the palms of his hands together... and murmuring O' Love, O' Love, O' Love" many times. However this religious comparison could also be seen as blasphemy, as the boy's romantic dream is a substitute for religious worship. Her very presence "summons his foolish blood" or makes him act obsessively. To him she represents everything that matters to him and everything that is important in life. However, halfway through the story the boy's dream switches to the bazaar, although this is still connected to his fascination with the girl his fixation seems to have switched from the female to the exotic world of fantasy. In this story religion also becomes a barrier to his dream and Mangan's sister can't go to the bazaar with him because of her religious duty - she has to go to the religious retreat in her convent. As in An Encounter, religion once again seems to prevent the main character from carrying out their dream. We also get some hints that the boy in the story may be an orphan - he is brought up by his Aunt and Uncle etc. If this is true then it makes the boy all the more emotionally vulnerable to having his dreams crushed and it can also partly explain his fascination with Mangan's sister. We sense that the girl is older than him; perhaps he subconsciously views her as a substitute mother. This also ties in with the Freudian Oedipus complex which Joyce would have read about, suggesting that a male child's choice for a partner will be very much influenced by their mother's personality. ...read more.

about how she has made up her mind and that it has all been planned but in the end it doesn't happen and probably never could. We can notice that each of the stories comes to a very abrupt end after a seemingly long build up. We get the impression that each story is but a brief look at the rich but restricted tapestry of Dublin life and each experience in Dubliners is important in its own way yet seemingly insignificant in the overall picture. Joyce avoids using proper names for many of the characters to help show us how irrelevant the name is when you consider the many thousands of people who are living similar lives all over Dublin. In conclusion all three of the stories concern young people struggling with emotion in their Dublin lives. In each case their dreams seem to have been ruined by the oppression of Dublin life. Stifling devout Catholicism restricts their lives and ambitions and prevents them from fulfilling their innermost desires. Adults also seem to stand in their way with cases of brutality, abuse and heavy handedness, all leading to a lack of empathy and love and the supposed happy family of the stereotypical Irish home. In the case of the younger children the crushing effect of the religiously motivated education system also dampens their ambition and crushes their dreams. Joyce leaves me with the impression that the only way for these three young Dubliners to find happiness in their lives is to leave Dublin. They each have learnt the lesson that dreams looked for in the city are hard to come by and any attempt they make will be thwarted. In each case all or some of the reasons mentioned above have blocked them in some way. This opinion certainly hints at Joyce's own disillusionment and personal experience and leaves us with a very powerfully negative (yet insightful) view of Dublin and Dubliners in the early years of the 20th century. By Andrew Kirke 5S ...read more.