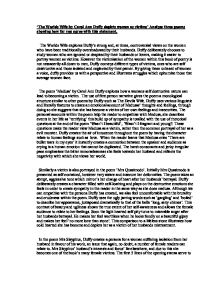 Duffy depicts women as victims in the worlds wife

'The Worlds Wife by Carol Ann Duffy depicts women as victims' Analyse three poems showing how far you agree with this statement. The Worlds Wife explores Duffy's strong and, at times, controversial views on the women who have been traditionally overshadowed by their husbands. Duffy deliberately chooses to study women who are ignored or despised by their husbands or lovers, making it easier to portray women as victims. However the victimisation of the women within this book of poetry is not nessacerily all down to men, Duffy conveys different types of victims, ones who are self deistructive and those isolated and neglected by their patner. By giving these unheard of women a voice, duffy provides us with a perspective and illustrates struggles which epitomize those that average women face. The poem 'Medusa' by Carol Ann Duffy explores how a womans self destructive nature can lead to becoming a victim. ...read more.

The harsh consonants and jerky irregular pace emphasises the bitter remorselessness she feels towards her husband and reflects the negativity with which she views her world. Similarly a victim is also portrayed in the poem 'Mrs Quasimodo'. Initially Mrs Quasimodo is presented as self contained, however very aware and insecure her deformities. The poem takes an abrupt, aggressive tone which mirror's her change of heart after her husbands' betrayal. Duffy deliberately creates a character filled with self-loathing and plays on the destructive emotions she feels in order to create sympathy in the reader in the same way as she does medusa. Although we can empathise with the persona Duffy has created, we also feel uncomfortable with the brutality and crudeness within the poem. Duffy uses the ugly jarring words such as 'gargling' and 'boiled' to describe her appearance, juxtaposed dramatically to that of the bells 'long, sexy chimes'. This contrast of beauty and ugliness shows the true extent of her self-awareness and allows the female audience to relate to her feelings. ...read more.

Towards the end of the poem the rhyming couplets become softer and reveal her changing emotions, she once felt angered and still does but her feelings of rage have developed into sadness and longing for her husband. By using a switch in tone, Duffy creates a more poignant atmosphere 'but I lie alone in the dark' this suggestion of loneliness creates empathy in the reader and depicts Mrs Sisyphus as a victim of her husbands neglecting behaviour. The sympathy Duffy creates in her readers allows the poems to take a lighter tone and suggests possible humour in places. By dedicating her entire book the voice of women who have gone unnoticed for so many years she directly opposes the idea that masculinity has dominated history, fiction and myth. The three poems I have analysed and many others in the book put a humorous slant on feminism and suggest that the relationship between the genders and the sexes is not defined by a hierarchical of power, resulting in the impression that men are always oppressors with women as their helpless victims. ...read more.