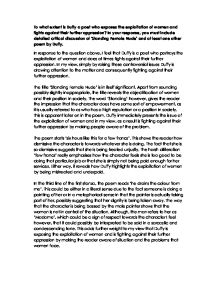 Nevertheless, I still feel that Duffy is simply exposing how women are exploited in an attempt to fight against their further oppression. The second poem I am going analyse is 'Whoever She Was'. Like the title in the previous poem, the title 'Whoever She Was' is significant in relation to the poem's meaning. The past tense verb, 'was' in the title implies that the character has no identity and suggests she is not the same person as she was before. This perhaps indicates that as the character has lost her identity possibly due to her exploitation. The female character in the poem is described 'as a flickering figure on a shilling screen'. The word 'flickering' gives off the impression that the character is not constant in the sense that a candle flutters. This gives the reader an image of something going on and off and thus not constant. This could also be interpreted as her moving back and forth between reality and past memories of her children. This gives the impression that she is defined by her role as a mother. Although, the exploitation of the women is shown in a different light and is perhaps, not as apparent as in' Standing female n**e', Duffy is still exposing the exploitation of women. ...read more.

Because of this, we also get the impression that the character does not have a definitive sense of identity. This is also the case for the character in 'Standing Female n**e' as she also has no distinct identity because of what she has to do in order to survive. In my view, Duffy purposely gives the characters no definitive identity to emphasise how their character and personality has been taken away because of their exploitation. Therefore, Duffy is revealing the exploitation of women to draw attention to the issue, in an attempt to combat women's further oppression. To conclude, although some people may find Duffy's poetry to be an unfair representation of men and to a certain extent be s****t, I feel that Duffy is simply trying to raise awareness of the exploitation of women. Therefore, I feel that Duffy is opposing women's further oppression. The two poems 'Standing Female n**e' and 'Whoever She Was' are generally quite dissimilar they do have certain aspects which are similar. For example, both characters do not have a 'real' identity and although in very different circumstances, the two characters have been exploited. Once again, I believe that Duffy is simply a poet who exposes the exploitation of women in an attempt to help improve the situation for others. ...read more.