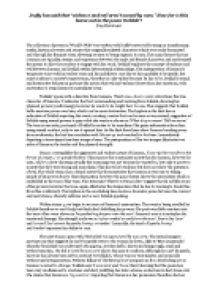 Duffy has said that violence and evil arent owned by men. How far is this borne out in the poem Delilah?

﻿Duffy has said that ?violence and evil aren?t owned by men.? How far is this borne out in the poem ?Delilah?? Dee Homruen The collection of poems in ?World?s Wife? was written with Duffy?s intent of focusing on transforming myths, historical events and stories that originally enlisted characters which were male dominated and through her feminist ways, elevating women to being superior to men. The main themes that are common are equality, sexism and supremacy between the male and female characters and modernised the poems to allow her readers to engage with her work. ?Delilah? explores the concept of violence and evil between Samson and Delilah within heterosexual relationships. The juxtaposition of Samson?s temperate voice with his violent ways and his inability to care shows his capability to be gentle, but must conform to society?s expectations, therefore is only violent because he has to be. Delilah?s s****l and destructive behaviour portrays the notion that evil and violence derive from her emotions, with motivation to strip Samson?s masculinity away. ?Delilah? opens with a directive from Samson, ?Teach me... ...read more.

The hyphen in the concluding line creates a dramatic pause between the current and next stanza, whereby informs us it is now Delilah speaking. Within stanza 3, we begin to see more of Samson?s insecurities. The event is being recalled by Delilah therefore we can?t help but think she?s belittling his powers. She puts very little emotion into the tone of her voice shown in ?he guided my fingers over the scar?. Samson?s scar is a metaphor for emotional damage. His strength is shown in ?a four-medal wound from the war?. Due to his ?scar? and ?wound?, he ?cannot be gentle, loving, or tender?. Ironically, the triad of ?gentle, loving? and ?tender? expresses his ability to care. The next stanza opens with ?He f****d me again/until he was sore.? The s****l imagery portrays one that suggests he can?t be gentle even to the woman he loves, alike to ?Mrs Quasimodo? whereby ?he f****d me underneath the gaping, stricken bells?, shows s*x being rough, cruel and without emotion. He did it ?until he was sore? shows the pain to conform. ...read more.

She?s shown no remorse towards her actions, even when she?s aware that he had promise God of never cutting his hair has been demolished by her. The fact she has ?cut every lock of his hair? meant she did intentionally rid him of his powers compares with ?Queen Herod?s? orders of ?Spare not one?. Both are selfishness whereby they did not consider anyone but themselves. Through the progression of voice and character of Delilah, the concluding line of the poem is very ambiguous. She states she did it with ?deliberate, passionate hands? therefore her act is justified that she did it out of love. However, we are aware that Delilah has the upper hand in the relationship ergo uses that to her advantage. Samson has not shown any signs of committing evils acts but only violence. The character of Delilah shows no sympathy towards the confessions of Samson?s wants. He wants her to teach him emotions, yet she shows none towards him therefore its representative of evilness. Stripping Samson of his masculinity was a way of Delilah expressing to society that she is the domineering character with the emotional strength that is lacking in Samson, thus she?s able to enrol this to damage him. Word count: 1000 ...read more.