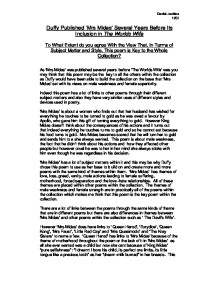 Duffy Published 'Mrs Midas' Several Years Before Its Inclusion in The Worlds Wife - To What Extent do you agree With the View That, In Terms of Subject Matter and Style, This poem is Key to the Whole Collection?

Duffy Published 'Mrs Midas' Several Years Before Its Inclusion in The Worlds Wife To What Extent do you agree With the View That, In Terms of Subject Matter and Style, This poem is Key to the Whole Collection? As 'Mrs Midas' was published several years before 'The Worlds Wife' was you may think that this poem may be the key to all the others within the collection as Duffy would have been able to build the collection on the base that 'Mrs Midas' set with its views on male weakness and female superiority. Indeed this poem has a lot of links to other poems through their different subject matters and also they have very similar uses of different styles and devices used in poetry. 'Mrs Midas' is about a woman who finds out that her husband has wished for everything he touches to be turned to gold as he was owed a favour by Apollo, who gave him this gift of turning everything to gold. However King Midas doesn't think about the consequences of his actions and it turns out that indeed everything he touches turns to gold and so he cannot eat because his food turns to gold. ...read more.

Both 'Eurydice' and 'Queen Kong' have links with 'Mrs Midas' because of the theme of forced separation within all three poems. In 'Eurydice' Eurydice dies and is forced to come back by Orpheus but because of her superior female mind she is able to out smart him into turning back to look at her which meant he lost her forever, this is forced separation even though it is what Eurydice wanted, in 'Queen Kong' however it is the opposite of this poem where Queen King falls in love but out lives her "man" but wears him around her neck as a kind of talisman. This is forced separation in a different sense as it was inevitable that the gorilla would outlive her "man" and is only natural. However these are both two ends of the scale and 'Mrs Midas' is in the middle of it as Mrs Midas sees it as a necessity for him to move out because of the danger but there is also still love but also hurt within the marriage because of his "lack of thought" for her. The theme of "lack of thought" is obviously in 'Eurydice' and 'Mrs Midas' but is also in 'Mrs Faust'. ...read more.