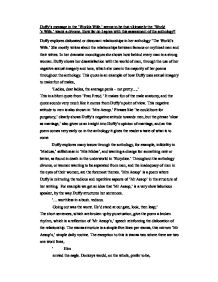 Duffy's message in the 'Worlds Wife,' seems to be that ultimately the 'World's Wife,' wants a divorce. How far do I agree with this assessment of the anthology?

Duffy's message in the 'Worlds Wife,' seems to be that ultimately the 'World 's Wife,' wants a divorce. How far do I agree with this assessment of the anthology? Duffy explores dislocated or dissonant relationships in her anthology 'The World's Wife.' She mostly writes about the relationships between famous or mythical men and their wives. In her dramatic monologues she shows how behind every man is a strong woman. Duffy shows her dissatisfaction with the world of men, through the use of her negative sexual imagery and tone, which she uses in the majority of her poems throughout the anthology. This quote is an example of how Duffy uses sexual imagery to make fun of males, 'Ladies, dear ladies, the average penis - not pretty...,' This is a blunt quote from 'Frau Freud.' It makes fun of the male anatomy, and the quote sounds very much like it comes from Duffy's point of view. This negative attitude to men is also shown in 'Mrs Aesop.' Phrases like 'he could bore for purgatory,' clearly shows Duffy's negative attitude towards men, but the phrase 'slow as marriage,' also gives us an insight into Duffy's opinion of marriage, and as this poem comes very early on in the anthology it gives the reader a taste of what is to come Duffy explores many issues through the anthology, for example, infidelity in 'Medusa,' selfishness in 'Mrs Midas', and wanting a change for something new or better, as found in death in the underworld in 'Eurydice.' ...read more.

'Mrs Rip Van Winkle,' sums up what is best about not having a husband, 'what hands-down beat the rest was saying a non too fond farewell to sex.' Here 'Mrs Rip Van Winkle,' is saying that the best bit about her husband being asleep, was not having to have a physical relationship with him. I think that this is a further example of Duffy allowing her own views to intrude into the work; the fact that she is a lesbian would match with not wanting a physical relationship with a man. Once he wakes up and sits up 'in bed rattling a bottle of Viagra,' the tone suggests that she isn't too pleased to see him again. The fact that she gave a 'non too fond farewell,' to sex and she laboriously says, 'until the day,' she came home and found her husband sitting up in bed, suggests that it wasn't a fond meeting. 'Mrs Rip van Winkle,' doesn't spend time telling us about her husband, instead she takes the time to tell us what she did herself. '...seeing the sights I'd always dreamed of, The Leaning Tower, The Pyramids. The Taj Mahal.' The fact that she did this shows a rather self centred quality to 'Mrs Rip Van Winkle,' and shows that she would much rather be without a Male. ...read more.

Ultimately I feel that a lot of the criticism of the men in this collection is from Duffy's point of view. I don't feel that Duffy respects the men she criticises in the poems. For example Pilate had Jesus killed, and Rip Van Winkle got drunk and slept for twenty years. But Shakespeare was the most famous playwright ever. As Duffy is a writer too, I feel that she respects Shakespeare, and therefore won't want to criticise him. The majority of the poems show women being in unhappy relationships with their men. Ultimately I do feel that the 'Worlds Wife,' does want a divorce. 'Mrs Rip Van Winkle,' would enjoy a divorce to 'find some hobbies,' for herself, and 'Mrs Aesop would just like to get away from her boring husband. Duffy does have some exceptions to this in the anthology. 'Anne Hathaway,' seemed very happy with her husband's company, even in the 'next best bed,' but for some women that isn't good enough. I feel that each poem Duffy writes is influenced by who she is writing about and whether she respects that person. Clearly she didn't respect Pilate with his 'camp hands,' but Shakespeare was another matter. With Duffy's particular sexual orientation, I also feel that it would be hard for her to be with a man who she would be satisfied with, which I also think reflects why she depicts most of the 'World's Wives,' wanting a divorce. ...read more.

This is a very good essay which shows the writer is very comfortable at discussing the similarities and differences of the poems. The writer does not make the
mistake of chronologically discussing each poem but shows sound knowledge of the poems and has structured the essay very well. Good use of PEA throughout and some perceptive analysis of language in quotes.