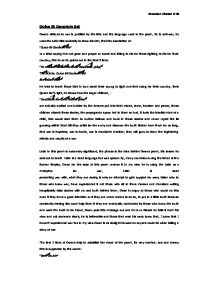 Dulce Et Decorum Est Owens attitude to war is justified by the title and the language used in the poem, he is anti-war, he uses the Latin title ironically to show his aim, that the translation of: "Dulce Et Decorum Est" Is a false saying it is not good and proper or sweet and fitting to die for those fighting to die for their country, this lie as he points out in the final 3 lines: "To children ardent for some desperate glory, The old Lie: Dulce Et Decorum Est Pro Patria mori" He tries to teach those that in turn teach their young to fight and that dying for their country, their Queen isn't right, he shows how the eager children, : "Desperate for some ardent glory" are actually excited and fuelled by the dreams put into their minds, fame, heroism and power, these children absorb these stories, the propaganda spoon fed to them as fuel, it fuels the idealist mind of a child, this would lead them to further believe and trust in those stories and never reject the lie growing within them till they enlist for the army and discover the truth hidden from them for so long, that war is hopeless, war is horrid, war is mankind's creation, they will grow to learn the frightening effects and results of a war. Latin in this poem is extremely significant, the phrase is the idea behind Owens poem, the lesson he sets out to teach. Latin is a dead language but was spoken by, many countries during the times of the Roman Empire, Owen for the sake of this poem revives it in my view he is using the Latin as a metaphor for war, Latin is dead presenting you with, what they are saying is only an attempt to gain support for wars, listen only to those who know war, have experienced it not those who sit in there manors and mansions writing inexplicably false stories with no real truth ...read more.

Stanza 3 and 4 we see Owen using his facts to their best, he portrays to us just how horrible the scene was, how the one unfortunate soldier unable to fit their mask has to suffer from the gas which his friends, comrades managed so sharply to escape. Owen using descriptive words, words with a deeper meaning to portray the situation his friend is facing, he firstly compares the gas to fire or lime, and he says he was "floundering" witch means he was almost like a fish out of water he was desperately trying to move away but wherever he turned those flames where burning and the other soldiers could do nothing to help him. Owen next portrays the gas as if it were a translucent pane of glass: "Dim through the misty panes" Barely able to see him through it the "thick green light" clouds his vision; Owen lastly portrays the gas as: "As under a green sea I saw him drowning." The use of drowning is closely related to his imagery of the fire, because fire is fuelled by oxygen and we breathe oxygen so as if in the sea Owens friend is losing oxygen, the gas filling his lungs he try's not to breathe but he has to, he is forced into his own death, the imagery of water also relates to when Owen personalises the situation: "He plunges at me, guttering, choking, drowning." The use of plunging is related to the water, as if he plunges into this sea of green, of gas and the use of the words "guttering, choking, drowning." Also relate to the water, when someone's lungs fill with water they choke they cough violently and the almost plead to get through it, which can look back to the use of plunges as if he is 'plunging' at Owen, he's throwing himself at Owen, he's begging him, pleading for his help but Owen cant do anything because to help him would have him sacrifice his own life. ...read more.

back to Tennysons poem: "Not though the soldiers knew Someone had blunder'd" This is a pure example of how Tennyson a writer of propaganda even manages to include this one mistake made by untrained generals, lieutenants around the army, the miscalculate enemy positions and numbers resulting in the case of "The Charge Of The Light Brigade" a total and utter slaughter of innocent young men with no idea, no clue as to what they are charging into. The history behind this can be compared to one philosophers theory of the reoccurrence of time, the repetition of events of the past and how man never learns from his mistakes, this can be compared to the blunder made by the leaders, it could have happened years ago and yet they still don't learn from it, they continue to send their men into unknown territory, places where they cant guarantee coming back alive, the lie of course is the simple saying of: "Dulce Et Decorum Est Pro Patria Mori" "It is right and proper/sweet and fitting to die for ones country" Anyone who can truly believe is highly patriotic or is tainted by there countries propaganda campaigns, it is the lie, the lie that has cost many lives and decimated many landscapes, its old, it has been retold and taught for many generations, by grandparents, uncles & aunties and the parents themselves who were taught it also, its shouldn't go any further, it has cost too many lives already, Owen is crying out stop the teachings, stop the slaughter of innocent young men corrupted by their countries propaganda, stop it and keep it ended because war doesn't solve anything, families are ended in wars, innocent people and beautiful landscapes are destroyed in senseless wars with only one point, Power for the country who wins but what is greater? The cost of victory, or the survival of so many soldiers that could be future fathers or even future scientists, writers and inventors, think about it.. Brendan Mullan S1B ...read more.