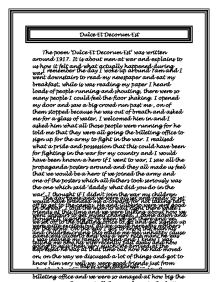 Dulce Et Decorum Est The poem 'Dulce Et Decorum Est' was written around 1917. It is about men at war and explains to us how it felt and what actually happened during war. I remember the day I woke up around 7am and I went downstairs to read my newspaper and eat my breakfast, while is was reading my paper I heard loads of people running and shouting, there were so many people I could feel the floor shaking. I opened my door and saw a big crowd run past me , on of them stopped because he was out of breath and asked me for a glass of water, I welcomed him in and I asked him what all those people were running for he told me that they were all going the billeting office to sign up for the army to fight in the war. ...read more.

On the way I got to know the man his name was Gilberto and was a very nice man, he was telling me how his wife recently past away and how depressed he was at that time but now he had moved on, on the way we discussed a lot of things and got to know him very well we were good friends just from what had happened today. We finally got to the billeting office and we were so amazed at how big the queues were, they went all the way down to the bottom of the road. We finally got in and had been check and we were both able to join, we were very happy at that moment until the next couple of days came and we were off to war. ...read more.

Gas! Quick, boys!', I also remember the time when someone got caught in the barbed wire and got shot to death and the same thing happened to my friend Gilberto, I was so upset I had lost a good friend like him and now I realised that this war was the biggest con ever. By this time the war had ended and all the people who had survived got all sent back home to our families. I think that I am very lucky going into that war and coming back out of it alive, the moment I came home I remember my wife and kids came running to me and we were all crying cause we hadn't seen each other for around four years and they didn't really know if I was still alive or not, but I count myself lucky. ..:: Balraj Singh Sabharwal ::.. ...read more.