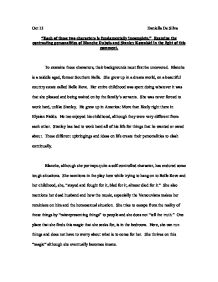 &quot;Each of these two characters is fundamentally incomplete.&quot; Examine the contrasting personalities of Blanche Dubois and Stanley Kowalski in the light of this comment.

Oct 13 Daniella De Silva "Each of these two characters is fundamentally incomplete." Examine the contrasting personalities of Blanche Dubois and Stanley Kowalski in the light of this comment. To examine these characters, their backgrounds must first be uncovered. Blanche is a middle aged, former Southern Belle. She grew up in a dream world, on a beautiful country estate called Belle Reve. Her entire childhood was spent doing whatever it was that she pleased and being waited on by the family's servants. She was never forced to work hard, unlike Stanley. He grew up in America: More than likely right there in Elysian Fields. He too enjoyed his childhood, although they were very different from each other. Stanley has had to work hard all of his life for things that he wanted or cared about. These different upbringings and ideas on life create their personalities to clash continually. Blanche, although she portrays quite a self-controlled character, has endured some tough situations. ...read more.

Not one of those men would have even thought of it, as that was not their way of life. As she got no attention out of the men this way, she results back to using her beauty and her body to obtain attention. "Yes Stella, I flirted with your husband!" Even though she is quite the coquette, people maintain a fairly high-class image of her. "The Hotel Flamingo is not the type of establishment that I would dare to be seen in!" There, rough men were found, not the Southern gentleman that she grew up with. Stanley does not conform to the type of man that Stella is accustomed to. He is very masculine, no a preppy Southern man. Blanche describes this by saying, "My sister has married a man." Besides the obvious, she is also talking about how he is strong, rough and violent. Stanley displays this violence three main times during Blanche's stay in Elysian Fields. ...read more.

He loves Stella unconditionally and even though it may seem that he would only miss her because he needs to be fed and tended to, it is more than that. It is true, as Blanche points out, that he is a Capricorn, usually known to need constant s*x, but his relationship with Stella does go deeper than that, although not plainly seen at the first look. Without her, He would be reduced to a working-class man with nothing to live for but himself and even though he beats her, he would be reduced to nothing if she ever left for good. He is afraid that Blanche is tearing them apart and that she might take Stella away from him. This is his one and only fear and it is powerful enough to lead him to do foolish things. These contrasts in the characters cause them to fight and quarrel through out the entire play, but they are each missing something in their personalities, which is actually overcompensated for by the other person. This is what causes the conflicts at the heart of the play. ...read more.