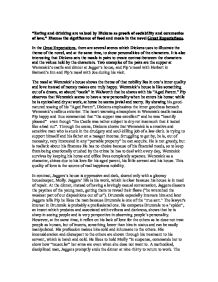 &quot;Eating and drinking are valued by Dickens as proofs of sociability and ceremonies of love.&quot; Discuss the significance of food and meals in the novel Great Expectations.

"Eating and drinking are valued by Dickens as proofs of sociability and ceremonies of love." Discuss the significance of food and meals in the novel Great Expectations. In the Great Expectations, there are several scenes which Dickens uses to illustrate the theme of the novel, and at the same time, to show personalities of the characters. It is also interesting that Dickens sets the meals in pairs to create contrast between the characters and the values held by the characters. Two examples of the pairs are the supper at Wemmick's castle and dinner at Jagger's house, and Pip's meal with Herbert in Barnard's Inn and Pip's meal with Joe during his visit. The meal at Wemmick's house shows the theme of that nobility lies in one's inner quality and love instead of money makes one truly happy. Wemmick's house is like something out of a dream, an absurd "castle" in Walworth that he shares with his "Aged Parent." Pip observes that Wemmick seems to have a new personality when he enters his home: while he is cynical and dry at work, at home he seems jovial and merry. By showing his good-natured teasing of his "Aged Parent", Dickens emphasizes the inner goodness beneath Wemmick's callous exterior. ...read more.

His profession makes him cold and inhumane to the others. His inconsideration and disrespect to the others are shown through his treatment to his servant, which is harsh and cold. He likes to hold Molly "in suspense, commands her to show how "muscular" her arms are even when she dose not want to. A methodical, disciplined man, Jaggers promptly ends the dinner at nine-thirty to return to work. The meal at Jaggers' house is full of conflicts and rejection. The guests only appeared to be happy but are not really happy. The comparison of Drummle, a supposedly high class noble people to a spider highlights the fact that Drummle is not noble in personality but only appeared to be noble due to his status. Materialistic pursues drive people cold and deprive them of love and happiness. Same as Wemmick, Jaggers himself dose not feel good about his career, Pip observes Jaggers washing his hands of them. The hand-washing, gargling, finger-nail cleaning ritual is likely Jaggers' way (his only way) of separating himself from the criminal world of his office and from any emotional attachments in his life. Pip's first meal with Herbert is a bridge to their friendship. ...read more.

Pip is not communicative to Joe at all. Hen in return, . Joe leaves with his dignity intact, delivering his message and departing quickly. Although Joe is angry with Pumblechook for going about town pretending that he was Pip's childhood playfellow, he says, "though it signify little now, Sir." Joe knows things have changed, the past is past, and none of that means much anymore to Pip. This is a sad scene highlighting how turning into a "gentleman" has caused Pip to become cold and insincere, even to his best friend of childhood. Compared to Herbert who played the same role as the host when Pip first came to London, Pip proves himself not a true "gentleman". This again emphasized the idea that nobility comes within an individual, and it is one's inner goodness that make him shine. Dickens' descriptions and contrast of several meals give us opportunities to observe the conversations among the characters, shows their personalities through their conversation and their actions. Through these scenes, we get a better understanding of different characters and at the same time, we have a better understanding of the message Dickens trying to convey---it is futile to try to obtain nobility and happiness by materialistic means, for they both come from simplicity and one's inner goodness. ...read more.