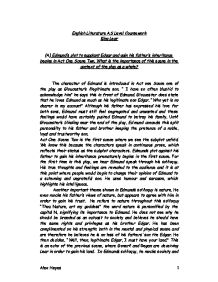 Edmund&amp;#146;s plot to supplant Edgar and gain his father&amp;#146;s inheritance begins in Act One Scene Two. What is the importance of this scene in the context of the play as a whole?

English Literature AS Level Coursework King Lear (A) Edmund's plot to supplant Edgar and gain his father's inheritance begins in Act One Scene Two. What is the importance of this scene in the context of the play as a whole? The character of Edmund is introduced in Act one Scene one of the play as Gloucester's illegitimate son. " I have so often blush'd to acknowledge him" he says this in front of Edmund. Gloucester does state that he loves Edmund as much as his legitimate son Edgar. "Who yet is no dearer in my account" Although his father has expressed his love for both sons, Edmund must still feel segregated and unwanted and these feelings would have certainly pushed Edmund to betray his family. Until Gloucester's blinding near the end of the play, Edmund conceals this split personality to his father and brother keeping the pretence of a noble, loyal and trustworthy son. Act One Scene Two is the first scene where we see the subplot unfold. We know this because the characters speak in continuous prose, which reflects their status as the subplot characters. Edmunds plot against his father to gain his inheritance prematurely begins in the first scene. For the first time in this play, we hear Edmund speak through his soliloquy. His true thoughts and feelings are revealed to the audience and it is at this point where people would begin to change their opinion of Edmund to a scheming and ungrateful son. He uses humour and sarcasm, which highlights his intelligence. Another important theme shown in Edmunds soliloquy is nature. ...read more.

This is echoed again in the second scene, when Edmund is pretending that he does not want his father to see the letter from 'Edgar' When Edmund is confronted, he replies "nothing my lord" this statement is simply used as a manipulative catalyst in arousing Gloucester's suspicion - which inevitably works. All of the themes are of great importance to the main plot and the play as a whole as they help to reinforce them. WORD COUNT: 960 English Literature AS Level Coursework King Lear (B) Read the two critical extracts on Edmund and, using their ideas as a starting point, analyse your response to Edmund's character Edmund is the youngest, albeit illegitimate son of the Earl of Gloucester. In the first scene of the play, we see his father joke about Edmund with the Earl of Kent in Edmunds presence. From then on, Edmund begins to deceive his father and brother, the rationale being to gain his father's wealth. I think that as a consequence of his illegitimacy, Edmund has acquired a Machiavellian attitude to life. Edmund is a villain; he plots against his own family for his profit. It is ironic that the beginning of Edmunds issues with society was because he was excluded from it, and yet we see him alienating himself from his family and runs the risk of making himself an outcast if he is exposed. He is exceptionally intelligent as he is able to manipulate both his father and brother and he also gets Goneril and Regan to fall in love with him. ...read more.

Society in Shakespeare's day openly frowned upon 'bastard' children and relationships outside of marriage, no doubt to compensate for the affairs and number if 'bastard' children there were then. The difference between now and the present day is, people have become less secretive and less elitist, the class system has almost certainly disappeared and 'bastard' children with single parents are overtaking the once mandatory popular nuclear family. In conclusion I think that Edmund is misunderstood. He is simply taking the activists role in the play and standing up for what he believes in and his rights. He is one of the most, if not the most, intelligent characters in this Shakespeare play. If society and his father had of given him the respect and recognition that he deserves then Edmund would have no argument with this. Edmund seeks love and attention, but when this is shown from both Regan and Goneril he does not know how to react to this. Consequently he acts as if they do not matter to him and turns it in to a sport of which one would be the most useful to him. This attitude echoes his father's in the opening scene, when he talks about the good sport at Edmund's making, treating women as an object. I do think that although Edmund received a misguided approach to life, he should take responsibility for his actions, which he does in the closing scene. He apologises but yet still retaining his humour and intelligence. Edmund had all of the fine qualities that were needed in an Earl and even King, but he would never have been given a chance to express them. ...read more.