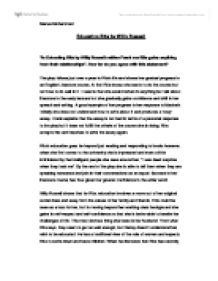 Educating Rita by Willy Russell "In Educating Rita by Willy Russell neither Frank nor Rita gains anything from their relationships". How far do you agree with this statement? The play follows just over a year in Rita's life and shows her gradual progress in an English Literature course. At first Rita knows she wants to do the course but not how to do well in it. It seems that she would rather do anything but talk about literature in the early lessons but she gradually gains confidence and skill in her speech and writing. A good example of her progress is her response to Macbeth. Initially she does not understand how to write about it and produces a 'crap' essay. Frank explains that the essay is not bad in terms of a personal response to the play but it does not fulfill the criteria of the course she is doing. Rita accepts this and resolves to write the essay again. Rita's education goes far beyond just reading and responding to books however, when she first comes to the university she is impressed and even a little intimidated by the intelligent people she sees around her, "I was dead surprise when they took me". ...read more.

This spells the end of their relationship. Later in the play Rita meets Denny with his new partner who is pregnant. Although Rita loses Denny it seems that she had outgrown him anyway, whilst he quickly forms a relationship he is happier with. In losing her job Rita goes from the skilled work of hairdressing to the unskilled work of being a waitress. However she seems to make the best of this change and finds the people she meets, such as Trisha, interesting and exciting. When Frank first meets Rita he sees her as a breath of fresh air in his life," I think you're marvelous, do you know, I think you are the first breath of air that's been in this room for years". He responds very well to her cheeky and irreverent approach to almost anything. He is so impressed that he tells her to get another tutor because he isn't good enough for her. Later on Rita becomes more conventional in her views, Frank thinks of himself as a sort of Frankenstein who has created a monster he can no longer control "you know, Rita, I think - I think that like you I shall change my ...read more.

Her mother was crying because they could have been singing a better song, and for Rita, singing a better song means getting a better education. The staging of the play, with just two actors, gives the audience a chance to see the change in Rita from close up, without the distraction of other characters or plot elements. It is easy to compare the Rita of the first scene, promising Frank a haircut, with that of the last scene when she finally gets round to cutting his hair. Because almost all of the action play takes place offstage, the audience's view of Rita's world is largely made up of her words and opinions. This use of Rita's point of view means that the audience tends to be on her side in her struggles with Denny, for example. If Denny had been on stage, his point of view might have come across more strongly. It seems that Rita gains more than she loses as a result of her education. She has some of the rough, and possibly more original, edges of her personality knocked off, but the things she loses are no longer of great value to her. ?? ?? ?? ?? Marwa Mohammed ...read more.