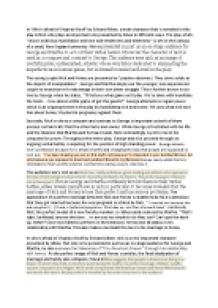 ﻿In ?Who?s afraid of Virginia Woolf? by Edward Albee, a main character that is revealed in this play is Nick who plays an important role presented by Albee in different ways. The play which, ??shows malicious humiliation and love and tenderness and bitterness?? is set on the campus of a small, New England university. Nick is presented in part as an on-stage audience for George and Martha to act out their verbal banter. Moreover the character of nick is used as a compare and contrast to George. The audience sees nick as an image of youthful pride, unblemished, athletic whose very life is dedicated to eliminating the imperfections in human genes, but is himself revealed as flawed in the play. ...read more.

Throughout the entire play, George and nick proceed through an ongoing verbal battle, competing for the position of high standing power. George attacks nick?s profession because he is afraid of artificially changing the way that people are supposed to turn out, ?? I've been drawing you out on this stuff, not because I'm interested in your terrible lifehood, but only because you represent a direct and pertinent threat to my lifehoood George openly admits that he's intimidated by Nick's youthful potential, and that he's seeking a way to undermine it. The audience see?s nick as an ideal man, coldly ambitious, good-looking and athletic who represents the idea of technological advancement. According to Martha he depicts, ??the perfect paragon of beauty and achievement??. ...read more.

This also makes one doubt the love in his marriage to honey. In who?s afraid of Virginia Woolf by Edward Albee, nick is a very important character presented by Albee. Not only is he presented in part as an on-stage audience for George and Martha, he also exposes the falseness of "The American Dream?? through his relationship with honey. As the perfect image of Nick and Honey crumbles, the final idealization of marriage and family also collapses. Edward Albee suggests that people in America are living in an illusion to which they hold on dearly to avoid facing the reality of a perfect marriage, children, wealth, success, education and religion, All of which compromise the American dream and hence Albee attacks and mocks this idea in the play which is revealed by the main characters to the audience. ...read more.