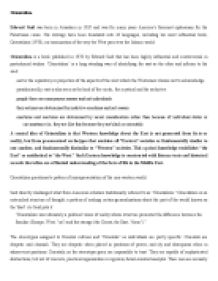 Edward Said's book &quot;Orientalism&quot; and his criticism of colonial writers.

﻿Orientalism Edward Said was born in Jerusalem in 1935 and was for many years America?s foremost spokesman for the Palestinian cause. His writings have been translated into 26 languages, including his most influential book, Orientalism (1978), an examination of the way the West perceives the Islamic world. Orientalism is a book published in 1978 by Edward Said that has been highly influential and controversial in postcolonial studies. ?Orientalism? is a long standing way of identifying the east as the other and inferior to the west. east is the repository or projection of the aspects of the west which the Westerners choose not to acknowledge. paradoxiacally, east is also seen as the land of the exotic, the mystical and the seductive. people there are anonymous masses and not individuals their actions are determined by instictive emotions and not reason emotions and reactions are determined by racial consideration rather than because of individual status or circumstance (ie, they are like this because they are black or orientals). A central idea of Orientalism is that Western knowledge about the East is not generated from facts or reality, but from preconceived archetypes that envision all ?Eastern? societies as fundamentally similar to one another, and fundamentally dissimilar to ?Western? societies. ...read more.

In some sense his book Orientalism aims to dismantle this myth, but more than that Said's goal is to identify Orientalism as a discourse. The oriental is a myth or a stereotype, but Said shows that the myth had, over the course of two centuries of European thought, come to be thought of as a kind of systematic knowledge about the East. Because the myth masqueraded as fact, the results of studies into eastern cultures and literature were often self-fulfilling. It was accepted as a common fact that Asians, Arabs, and Indians were mystical religious devotees incapable of rigorous rationality. It is unsurprising, therefore that so many early European studies into, for instance, Persian poetry, discovered nothing more or less than the terms of their inquiry were able to allow: mystical religious devotion and an absence of rationality. Orientalism as a result of power. Following the ideas of Michel Foucault, Said emphasized the relationship between power and knowledge in scholarly and popular thinking, in particular regarding European views of the Islamic Arab world. ...read more.

Many of us who grew up in the colonial era were struck by the fact that even though a hard and fast line separated colonizer from colonized in matters of rule and authority (a native could never aspire to the condition of the white man), the experiences of ruler and ruled were not so easily disentangled. That means that nativism cannot be an effective answer to western hegemony (later he gets more specific: "Afrocentrism is as flawed as Eurocentrism"). There?s no simple way to achieve decolonization, just as (in the more limited context of the United States), there?s no simple way for anyone to disentangle him or herself from the effects of r****m. But it also means that, in many respects, colonialism is still with us. It was through the colonial system that most of the national borders in Africa and Asia were drawn up, in many cases arbitrarily. But more than that are the effects of colonial language, the colonial state bureaucracy, and especially colonial attitudes to things like economic development. why do we follow textual attitude? lack of info-only inf available is through literary texts reader response-trust in particular author ...read more.