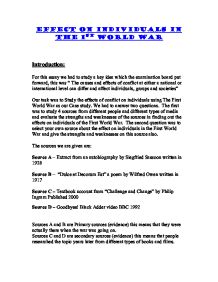 Effect on Individuals in the 1st world war

Effect on Individuals in the 1st world war Introduction: For this essay we had to study a key idea which the examination board put forward, this was " The causes and effects of conflict at either a national or international level can differ and affect individuals, groups and societies" Our task was to Study the effects of conflict on individuals using The First World War as our Case study. We had to answer two questions. The first was to study 4 sources from different people and different types of media and evaluate the strengths and weaknesses of the sources in finding out the affects on individuals of the First World War. The second question was to select your own source about the effect on individuals in the First World War and give the strengths and weaknesses on this source also. The sources we are given are: Source A - Extract from an autobiography by Siegfried Sassoon written in 1928 Source B - "Dulce et Decorum Est" a poem by Wilfred Owen written in 1917 Source C - Textbook account from "Challenge and Change" by Philip Ingram Published 2000 Source D - Goodbyee! Black Adder video BBC 1992 Sources A and B are Primary sources (evidence) this means that they were actually there when the war was going on. ...read more.

However this poem only represents his point of view, it would be nice to compare with maybe someone with a different general rank to him in the army, so it isn't really a fair source. It may have been adapted we don't know, it could have been written in Latin because the author has put in a phrase of Latin so he obviously knows how to write it. This source is relevant to what the Task says so it is a pretty good source. Source C Source C is a Textbook account from "Challenge and Change" which was written by Philip Ingram. It was published in 2000. This source is a piece of secondary evidence. This is helpful because the author may have used several sources and looked at different points of view. This is quite a long source so the author must know what he is talking about. He has probably studied about the war and read other books about it as well. The source is fair because it covers all points of view on what life was like in trenches to changing attitudes on the war. The source is biased because the Author has only chosen what he wanted to put in. The source may not be as accurate as some others because it was written 75 years later. ...read more.

A weakness of this source is that it should have been longer but the time ran out for him although there was a lot of information in the 15 minutes. The source is an excellent source and is very relevant to the task. Conclusion As you can see there are strengths and weaknesses in all of them. Comparing these sources shows there are a variety of views from all the individuals who took part in the war. Although if you knew a person's personal experiences during the war you might understand why they have the views that they have. The perfect source would be a mixture of both Primary evidence and secondary evidence. That way you could have a first hand account of what happened and also the breadth and detail of events. The most interesting source that I looked at was Source E because it was so fascinating and also he could see what weapons they used and how they were implemented. The most detailed source was Source C because it told you a lot about what trench life was like and also the attitudes of the soldiers. The most hard-hitting source was Source B the poem. It was very honest and scared you by giving you feelings about how they felt when they were gas attacked. All the sources are useful in finding out what Individuals lives were affected during the First World War. BY DHIRAJ AERY ...read more.