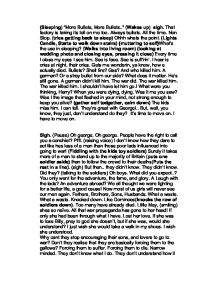 (Sleeping) “More Bullets, More Bullets..” (Wakes up)  sigh. That factory is taking its toll on me too. Always bullets. All the time. Non Stop. (tries getting back to sleep) Ohhh whats the point. (Lights Candle, Starts to walk down stairs) {muttering to self}What’s the use in sleeping? (Walks into living room) (looking at wedding photo and closing eyes, pressing it close) Every time I close my eyes I see him. See is face. See is suff’rin’. I hear is cries at night, their cries. Gets me wonderin, ya know, how e actually died. Bullets? Shell fire? Gas? And who killed him. A german? Or a stray bullet from our side? What does it matter. He’s still gone. A german didn’t kill him. The war did. The war killed him. The war killed him. I shouldn’t have let him go.! What were you thinking, Harry? When you were dying, dying. Was it me you saw? Was I the image that flashed in your mind, not strong enough to keep you alive? (gather self todgether, calm down) The kids miss him. I can tell. They’re great with George!.. But, well, you know, they just, don’t understand do they?  It’s time to move on. I have to move on.

Sigh. (Pause) Oh george. Oh george. People have the right to call you a conchie!? Pfft. (raising voice) I don’t know how they dare to act like hes less of a man than those poor lads influenced into going to war! (Fiddling with the kids toy soldiers) Surely it takes more of a man to stand up to the majority of Britain (puts one soldier aside) than to follow the crowd to their deaths(Puts the rest in a line). (sigh) But then.. they didn’t know. They didn’t know. Did they? (talking to the soldiers) Oh boys. What did you expect..? You only went for the adventure, the fame, and glory. A Laugh with the lads? An adventure abroad? We all thought we were fighting for a better life, a good cause! Now most of us girls will never see our men again. Fathers, Brothers, Sons, Husbands. What a waste. What a waste. Knocked down. Like Dominoes(knocks the row of soldiers down). Too many have already died. Little May, (smiling) shes so naïve. All that war propaganda has gone to her head! If only she had been through what I have. Lost her love. If she was to lose Billy, pray to god she doesn’t, but if she was, would she understand? I just wish she would take a walk in my shoes. I wish she understood.