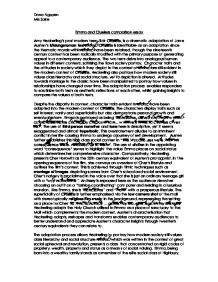 Emma and Clueless comparison essay Amy Heckerling's post modern teen-flick Clueless, is a cinematic adaptation of Jane Austen's bildungsroman text Emma. Clueless is identifiable as an adaptation since the thematic morals within Emma have been retained, though the nineteenth century context has been radically modified with the primary purpose of generating appeal to a contemporary audience. The two texts delve into analogous human values in different contexts, satirising the flaws society portray. Character traits and the attitudes in society which they depict in the context of Emma are still evident in the modern context of Clueless. Heckerling also portrays how modern society still values class hierarchy and social structure, yet its depiction is altered. Attitudes towards marriage in the classic have been manipulated to portray how values in relationships have changed over time. The adaptation process enables responders to scrutinize both texts as aesthetic reflections of each other, whilst gaining insights to compare the values of both texts. Despite the disparity in context, character traits evident in Emma have been adapted into the modern context of Clueless. The characters display traits such as self interest, vanity and superficiality but also demonstrate personal growth and eventual reform. Emma is portrayed as being "handsome, clever, and rich with a comfortable home and happy disposition... ...read more.

Her importance as a result of her elevated status is represented by the use of formal language where Highbury "offered her no equals."Heckerling adapts this class structure into Clueless as a system of high school "cliques" that is consumerist driven focusing on materialism. This is depicted through the individual's ability to increase their social position with the acquisition of wealth as perceived by Tai. The change in context allows the audience to comprehend and partake in the experience of a bildungsroman text. The film Clueless is centred on Cher's high school, hence popularity and image is the primary component to social status within the school ground hierarchy. This change in context rules out the notion that individuals must be born into the aristocratic class in order to be socially accepted. It has been replaced with stereotypical pre-defined groups such as the "Betties", "Barneys", "The Loadies", "The Persian Mafia", and "The Crew" (the only acceptable ones). The values in Emma that determined social status such as wealth, occupation and property have been adapted into image and fashion in Clueless. The social values of Cher's world depended on the conspicuous materialistic possessions such as mansions, fast expensive cars, designer clothing and superficial beauty and body image. The recurring motifs of nose and chin strips reinforce and satirise the 20th Century society's obsession with image. ...read more.

Cher's exclaimed voice over at the end of the film "As If! I am only sixteen..." is juxtaposed with dramatic irony at an undercut shot of Mr. Hall and Ms. Geist's wedding. The combination of these techniques create humour whilst reinforcing the manipulation in values as marriage at sixteen is unrealistic in the modern context of Clueless though it was quite prevalent in Austen's era. The marriage scene is imperative also in that it shows a modernised attitude to r****m and acceptance of all levels of society. Clueless also explores more contemporary themes relating to sexuality and the promiscuity of relationships. Christian's homosexuality, which is an adaptation of Frank Churchill's engagement secrecy to Jane Fairfax, would not have been morally accepted back in the nineteenth Century. This evidently shows the change in attitudes about sexuality in relationships. This shift in focus from marriage to s****l relationships provides an overall insight of the changing attitudes on marriage from Emma to Clueless. The High school teen movie Clueless brings the universal thematic elements of character traits, social hierarchy and marriage from Austen's Emma and manipulates them to appropriate with contemporary audiences. The adaptation process has retained character traits, though a shift in human values in marriage and social status have been due to societal change. Thus, despite the change of context and audience, the values of both texts are essentially the same. ?? ?? ?? ?? Dona Nguyen Mrs Sake ...read more.