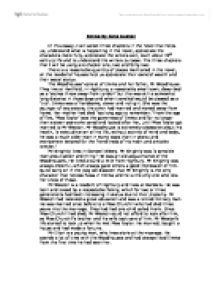 Emma By Jane Austen In this essay, I will select three chapters in the novel that helps us, understand what is happening in the novel, appreciate the characters more fully, appreciate the writers skill, learn about 19th century life and to understand the writers purpose. The three chapters that I will be using are chapter one, two and forty-two. There is a reasonable quantity of places mentioned in the novel, all the residents' houses help us appreciate their owners' wealth and their social status. The Woodhouses' consist of Emma and her father, Mr Woodhouse. They live at Hartfield, in Highbury; a reasonably small town, described as a 'stones throw away from London' but this was still a somewhat long distance in those days and when travelled would be classed as a 'trip'. Emma was a 'handsome, clever and rich girl. She was the younger of two sisters; the other had married and moved away from home. Her mother had died 'too long ago to remember.' From the age of five, 'Miss Taylor' was the governess of Emma and for no longer than sixteen years she cared and looked after her, until Miss Taylor got married to Mr Weston. Mr Woodhouse is extremely obsessive about his health, 'a valetudinarian all his life, without activity of mind and body, he was a much older man in many ways than in years; and everywhere beloved for the friendliness of his heart and amiable temper.' ...read more.

For instance, as soon as Miss Taylor marries and moves away with Mr Weston, she is referred to as 'poor' Miss Taylor, hinting that she should be missing their company, 'Poor Miss Taylor I wish she could be here again, what a pity it is that Mr Weston ever thought of her.' As both Emma and her father don't work, to entertain themselves, they arrange social gatherings and meals to entertain themselves and their friends. Randalls is the home of Mr Weston and Miss Taylor. Mr Weston purchased the house, when Mr Weston's first wife, Miss Churchill died and Mr Weston sought after a new life. He gave up the military and begun to trade, already having brothers established in an impressive way in London, which awarded him a favourable opening. By this time he had a small house in Highbury. He then bought a reasonably small estate adjoining Highbury. However, once he and Miss Taylor met, he looked for a new and greater estate. Having saved for a long time, he finally bought 'Randalls'. Miss Taylor's position in society is seen as lower than Mr Weston's. She was a governess which is basically, a different kind of servant. In 19th century life, a woman's ambition was to marry above her station, and this is what Miss Taylor has done, but Mr Weston's previous marriage was the complete opposite. ...read more.

We see that 19th century couples didn't get married because of love, but instead because they wanted to gain riches and a higher social status. The social class and status at this time played a key role, in who you got married to and the respect that you would receive from various people. The Woodhouses and Mr Knightly are obviously uppermost in society and at the other end of the hierarchy we see people like Miss Bates, representing the working class, also at this time men were seen as far superior to women. Jane Austen's views on marriage are very strong, she said things like 'I consider everyone as having the right to marry once in their lives for love, if they can.' This clearly shows that Austen believes that you should marry for love and not for wealth. She has also said 'Single women have a dreadful propensity for being poor, which is a very strong case in favour of wedlock, Austen shows here that the status of women is very low and they have to get married to gain wealth and status, they can't make that wealth and status themselves. The settings throughout the novel give us a vibrant representation of the life in a small 19th century village. Austen makes a well-written and witty novel about marriage and social status of the day come to life to give interest about a straightforward and everyday thing, marriage. ...read more.