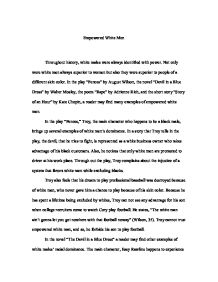 Empowered White Men Throughout history, white males were always identified with power. Not only were white men always superior to women but also they were superior to people of a different skin color. In the play "Fences" by August Wilson, the novel "Devil in a Blue Dress" by Walter Mosley, the poem "r**e" by Adrienne Rich, and the short story "Story of an Hour" by Kate Chopin, a reader may find many examples of empowered white men. In the play "Fences," Troy, the main character who happens to be a black male, brings up several examples of white men's dominance. In a story that Troy tells in the play, the devil, that he tries to fight, is represented as a white business owner who takes advantage of his black customers. Also, he notices that only white men are promoted to driver at his work place. Through out the play, Troy complains about the injustice of a system that favors white men while excluding blacks. Troy also feels that his dream to play professional baseball was destroyed because of white men, who never gave him a chance to play because of his skin color. ...read more.

That's capitalism" (Mosley, 147-148). Albright uses racial terms pretty easily, and because Easy happens to be a black man who needs the job he needs to deal with it. Another example of white men in power in the novel is Mr. Carter. As Easy says, Mr. Carter shows "the worst kind of r****m" by treating Easy like an equal (Mosley, 166). Mr. Carter, as Easy explains in the novel, does not recognize the racial difference between the two of them. Mr. Carter behaves as if Easy was less than a human being: "Mr. Todd Carter was so rich that he didn't even consider me in human terms." (Mosley, 166). For many ages white men were also always superior to women. One of the examples for that, a reader may find in the poem "r**e" by Adrienne Rich. In the first stanza of the poem Rich writes that the cop has "one hand touching his gun" (Rich Line 5). That immediately draws attention to the policeman as the symbol of power and control over the woman. ...read more.

Ironically, her husband's death makes Louise feel alive for the first time. Louise realizes that "there would be no powerful will bending hers in that blind persistence with which men believe they have a right to impose a private will upon a fellow-creature" (Chopin, 124). Chopin seems to be making a comment on nineteenth-century marriages that granted the man a right to own and dominate the woman. Louise had been repressed by her husband, losing her sense of identity. Bending to her husband's will had left her so depressed that she longed for a short life. His death allows her to ponder not just her own life, but also the position of women in general. The history was very kind for a white man. It was always white man who was in power and had superiority over opposite s*x, women, as well as men of a different skin color. Fortunately, this image of an empowered white man, still visible in today's society, begins to change. Woman and man of a different race start to be treated equally and by law are given equal rights and opportunities. If only those laws were applied couple of decades earlier, lives of the main characters mentioned above would be a lot easier. ...read more.