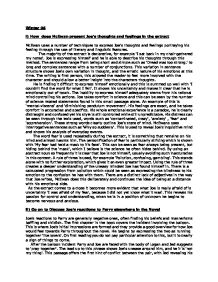 Winter 06 i) How does McEwan present Joe's thoughts and feelings in the extract McEwan uses a number of techniques to express Joe's thoughts and feelings portraying his feeling through the use of literary and linguistic features. The majority of the extract is declarative, for example 'I sat back in my chair gathered my notes'. Joe is expressing himself and he is able to describe his thoughts through this method. The sentences range from being short and simple such as 'Dread was too strong.' to long and complex sentences with a number of conjunctions. This variation in sentence structure shows Joe's own variation in thought, and the erratic nature of his emotions at this time. The writing is first person, this allowed the reader to feel more involved with the character and should allow a better insight into the characters thoughts. He is finding it difficult to express himself emotionally and this is summed up well with 'I couldn't find the word for what I felt'. ...read more.

There is a calculated progression from pollution which could be seen as expressing the blindness to his emotion to the confusion he has with them. There are a distinct lack of adjectives in the way that Joe writes, McEwan does this deliberately and continues the idea of being at a distance with his emotional side. As the extract comes to a close it becomes more evident that what Joe is really afraid of is uncertainty 'I was afraid of my fear, because I did not yet know what it was'. This reveals his passion for control and understanding, when he is in a position of unknown he begins to become nervous and anxious. ii) Go on to Discuss Joe's reactions to Parry elsewhere in the Novel Joe's reactions to Parry are generally negative ones, often finding his beliefs and mannerisms baffling and childish. The first chapter in the book covers the incident involving the balloon. This is where Joe's initial impressions are formed and they provide a good overview for how Joe would feel towards Parry throughout the novel. ...read more.

This links in with how Joe see's Jed as a child an example of this is 'He was like a curious child'. This also accounts for his impatience and like a child when he does not get his own way he throws a tantrum.This childish disposition coupled with the instability of Jed gives the reader a sense that Joe is nervous and possibly even afraid of Joe. It pre-occupies his mind throughout the novel and is something that haunts him. Joe believes that Jed is obsessed and this is shown with 'the long winter of his obsession'. This creates a striking image, as seeds lay dormant during the winter and grow in the summer it is creating a chilling link with nature. There is a stage in the novel where Joe shrugs off his nervous unease towards Jed and convinces himself he is no threat. This is shown in their first meeting after the initial balloon incident whereby Jed is waiting outside. This is shown with 'he was a harmless fellow'. Although he may just be trying to comfort himself, and put aside his doubts in hope it will somehow go away; Joe often reassures himself in this way. ...read more.