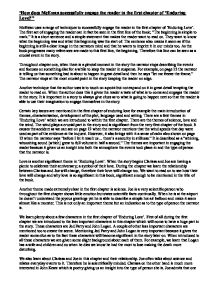 'How does McEwan successfully engage the reader in the first chapter of 'Enduring Love?'' McEwan uses a range of techniques to successfully engage the reader in the first chapter of 'Enduring Love'. The first act of engaging the reader can in fact be seen in the first line of the book; "The beginning is simple to mark." It is a short sentence and a simple statement that makes the reader want to read on. They want to know what the beginning was and what this beginning was the start of. The sentence also makes it seem as if the beginning is still a clear image in the narrators mind and that he wants to imprint it in our minds too. As the book progresses many references are made to this first line, the beginning. Therefore this line can be seen as a crucial event in the story. Throughout chapter one, when there is a pivotal moment in the story the narrator stops describing the events and focuses on something else for a while to keep the reader in suspense. For example, on page 12 the narrator is telling us that something bad is about to happen in great detail and then he says "let me freeze the frame." ...read more.

During the chapter we learn the relationship between Clarissa and Joe will change, therefore their love will change too. We want to read on to see how their love will change and why love is so significant in this book, significant enough to be mentioned in the title of the book. Another theme made extremely clear in the first chapter is science. Joe is a very scientific person who throughout the first chapter shows little emotion but states scientific facts continually. When he is at the airport he doesn't understand the joyous greetings yet he is able to describe a simple hot air balloon and make it seem almost like a monster. This is not only an important theme but an indication as to the type of person the narrator is. We learn plenty about a few characters in the first chapter of 'Enduring Love'. First of all during the first chapter we are introduced to the less important characters in this chapter which will come to have a huge part in the story. These characters are Jed Parry and John Logan. A couple of other less important characters are mentioned too to create the scene. ...read more.

As I have mentioned scientific language is used by Joe throughout the first chapter indicating the type of person Joe is. The language used to describe the wind makes the wind more terrifying than ever which is important. The wind was out to kill and it achieves its purpose. The reader is engaged through the language Joe uses because it demonstrates his vast knowledge. The setting is one of the most important parts in the chapter to keep the reader engaged. We go from an idyllic place where it is spring and has a strong resemblance to the Garden of Eden to a roaring, ferocious wind that threatens to pick up and sweep away anyone in its path. The setting sets the tone of the book and as the setting changes so does the whole atmosphere in the book. The reader is interested in how such a beautiful day could turn into such a horrible day so quickly. In conclusion, McEwan successfully engages the reader in the first chapter of 'Enduring Love' with an insight into the setting, the main characters and most of all the plot of the story. McEwan launches into the story straight away keeping the readers hooked from the very beginning and he never once gives their minds an opportunity to wonder. ...read more.