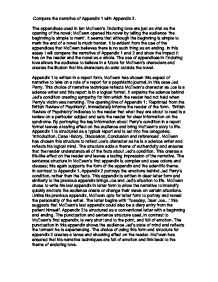 Enduring Love by Ian McEwan essay. Compare the narrative of Appendix 1 with Appendix 2.

Compare the narrative of Appendix 1 with Appendix 2. The appendices used in Ian McEwan's Enduring love are just as vital as the opening of the novel; McEwan opened his novel by telling the audience 'the beginning is simple to mark'. It seems that although the beginning is simple to mark the end of a novel is much harder. It is evident from the use of the appendices that McEwan believes there is no such thing as an ending. In this essay I will compare the narrative of Appendix 1 and 2 and show the impact it has on the reader and the novel as a whole. The use of appendices in Enduring love allows the audience to believe in a future for McEwan's characters and creates the illusion that his characters do exist outside the novel. Appendix 1 is written in a report form, McEwan has chosen this aspect of narrative to take on a role of a report for a psychiatric journal, in this case Jed Parry. This choice of narrative technique reflects McEwan's character as Joe is a science writer and this report is in a logical format. ...read more.

The letter begins with 'Tuesday, Dear Joe...' this suggests that McEwan's last appendix could also be a diary entry from the patient himself. Appendix 2 is structured as a conventional letter with a beginning and ending. The punctuation and sentence structure used, in contrast to McEwan's first appendix, is very short and to the point, and full of emotion. The punctuation in this appendix shows the audience Jed's state of mind and reflects the torment he is experiencing. The choice of using this form and structure for appendix 2 creates a tense and shocking effect on the reader. McEwan has ensured that his narrative techniques are full of emotion and link back to the theme of enduring love. The language used in Appendix 1 is very formal and detached; it is written in third person and supports the form and structure of a report. McEwan chooses to use objective scientific language, which after an emotionally charged novel comes as a shock. 'Questioned in interview about his erotic ambitions with regard to R, P was evasive and even offended.' This statement in appendix 1 is a clear example of a very formal and detached choice of diction to describe the life changing events that are happening. ...read more.

Unlike Appendix 1, McEwan's last appendix allows the reader to understand the characters feelings and perspective and may make the reader to sympathise with the character. This final appendix shows the reader that Joe can never feel safe when Parry is still obsessed with him. The final words of the letter are 'faith' and 'joy' these words are normally presented as positive connotations, but in this context are terrifying. The choice of language in this appendix are not satisfying to the reader, even though in contrast to the first appendix they are full of emotion but it leaves the reader feeling disturbed, confused and chilled. Enduring Love is not a conventional book and does not follow the three parts; beginning middle and end, however McEwan is not a conventional writer. The appendices used in Enduring love have great relevance to the rest of the novel and McEwan's characters. The appendices compliment the unconventional novel as the uncertainty of beginnings and endings play a key role throughout the novel. I believe that Ian McEwan is aware that a 'light-hearted' ending would not suit this dark and sinister novel, but by adding appendices it adds authenticity and a thrilling ending to this compelling novel. ...read more.