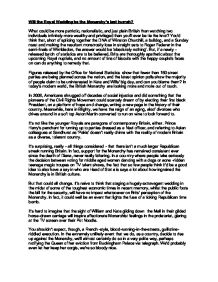 Will the Royal Wedding be the Monarchy's last hurrah? What could be more patriotic, nationalistic, and just plain British than watching two individuals infinitely more wealthy and privileged than you'll ever be tie the knot? You'd think that, short of splicing together the DNA of Winston Churchill, a bulldog, and a Sunday roast and making the resultant monstrosity lose in straight sets to Roger Federer in the semi-finals of Wimbledon, the answer would be 'absolutely nothing'. But, if a newly-released batch of statistics are to be believed, Brits are thoroughly apathetic about the upcoming Royal nuptials, and no amount of tins of biscuits with the happy couple's faces on can do anything to remedy that. Figures released by the Office for National Statistics show that fewer than 180 street parties are being planned across the nation, and the latest opinion polls show the majority of people claim to be uninterested in Kate and Wills' big day, and can you blame them? ...read more.

It's naive to think that staging a hugely extravagant wedding in the midst of some of the toughest economic times in recent memory, whilst the public foots the bill for the security, will have no impact whatsoever on Brits' perception of the Monarchy. In fact, it could well be an event that lights the fuse of a ticking Republican time b**b. It's hard to imagine that the sight of William and Kate gliding down the Mall in their gilded horse-drawn carriage will inspire affectionate Monarchist feelings in the proletariat, glaring at the TV screen over their Pot Noodle. You shouldn't expect, though, a French-style, blood-running-in-the-streets, guillotine-riddled execution. In the extremely unlikely event that we do, as a country, decide to rise up against the Monarchy, we'll almost certainly do so in a very polite way, perhaps notifying the Queen of her eviction from Buckingham Palace via telegraph. We'd probably even let her keep her corgis, we're so b****y nice. ...read more.

I juxtaposed the glitzy election of Barack Obama in 2008, when Americans were filled with hope after opening a new chapter in their history, with Britain waiting for Prince Charles to take to the throne. The contrast between the two heads of state and the two systems was supposed to highlight how outdated the Monarchy is compared to other systems around the world. I used the metaphor of lighting "the fuse of a ticking time b**b" to describe how the Royal Wedding will perhaps make the public - who are suffering due to government cuts and the economic downturn - more Republican, on the whole. Throughout the article, I try to humorously emphasise how the public are living in tough times compared to how the Royals are living. I inserted, for example, the subordinate clause "glaring at the TV screen over their Pot Noodle" to compound the act that the public are going through tough times, whilst the Royals, at the same time, are having an extravagant wedding. ...read more.