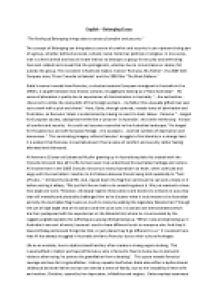 English Belonging Essay. Raimond Gaitas memoir Romulus, My Father, the 2007 ABC Compass story From Cronulla to Kokoda and the 2008 film The Black Balloon.

﻿English ? Belonging Essay ?The Feeling of Belonging brings about a sense of comfort and security.? The concept of Belonging can bring about a sense of comfort and security it can represent being part of a group, whether defined as social, cultural, racial, historical, political or religious. In one sense, man is a herd animal and has an innate instinct to belong to a group for security and well-being. Core and related texts reveal that the protagonists, whether due to circumstance or desire, fall outside the group. This is evident in Raimond Gaita?s memoir ?Romulus, My Father?, the 2007 ABC Compass story ?From Cronulla to Kokoda? and the 2008 film ?The Black Balloon.? Gaita?s memoir reveals how Romulus, a reluctant eastern European immigrant to Australia in the 1950?s, is caught between two diverse cultures, struggling to belong as a ?New Australian?. His sense of alienation is partly due to experiences of discrimination in Australia, ?...the authorities... chose not to utilise the many skills of the foreign workers... my father this unusually gifted man was set to work with a pick and shovel.? Here, Gaita, through contrast, reveals tones of admiration and frustration, as Romulus? talent is undermined by having to resort to basic labour. ...read more.

child growing up, ?When I was a kid growing up in Australia it was sort of weird, because I used to have different lunch to everyone else. And they?d have birthday parties and things like that, or just places they?d go different to us.? It is evident here that Ali has always struggled in Australia similar to Romulus due to their cultural heritages. Life as an outsider, due to dysfunctional families, often creates a strong urge to belong. This is exemplified in Gaita?s portrayal of Romulus, who is forced to flee his home due to domestic violence after trying ?to protect his grandfather from a beating?. This quote reveals Romulus? courage and love for his grandfather. History repeats itself when Gaita also suffers a dysfunctional childhood and both father and son are denied a sense of family, due to the instability of their wife and mother, Christine, caused by her depression, infidelities and neglect. Gaita employs assonance and symbol to describe her torment, ?A dead red gum...became for my mother a symbol of her desolation?. ...read more.

Thomas struggles to accept him, vacillating between love, understanding, embarrassment and resentment. His father responds to his conflicting emotions, ?All I know is he?s my own, and you?re weak if you don?t look after your own?. The repetition reinforces the importance of family responsibility, a value shared by Romulus. The ignorance of neighbours is apparent through dramatic irony when they complain to Family Welfare about violence when in fact lovable Charlie is simply behaving boisterously. Thomas? peers taunt him calling his brother ?a spastic? but his caring friend, Jacquie states, ?Don?t worry what those stupid boys at school think. You have to stop wishing Charlie was normal. It?s never going to change?. Like Romulus there is the painful challenge to belong to a dysfunctional family but Thomas heeds his father?s metaphorical advice, reflecting values of the Aussie battler, ?Son, s**t in one hand, wish in the other and see which one gets full fastest? finally accepting his ?lot?. The personal, cultural, social and racial relations explored in the abovementioned texts reinforce the notion that we all yearn to belong for security and well being. For those who happen to fall outside the group, belonging offers a sense of place, self-worth, refuge and consolation, vital to making life easier in our hectic world. ...read more.