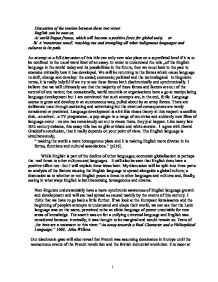 English can be seen as - A) world lingua franca, which will become a positive force for global unity or B) A 'monstrous weed', reaching out and strangling all other indigenous languages and cultures in its path. Discuss

Discussion of the tension between these two views: English can be seen as, A/ world lingua franca, which will become a positive force for global unity or B/ A 'monstrous weed', reaching out and strangling all other indigenous languages and cultures in its path. An attempt at a full discussion of this title can only ever take place on a superficial level if it is to be confined to the usual word limit of an essay. In order to understand the role ,,of the English language in the world today and its possibilities in the future, then we must look to the past to examine critically how it has developed. We will be returning to the forces which cause language to shift, change and develop: the social; economic; political and the technological. In linguistic terms, it is really helpful if we try to see these forces both diachronically and synchronically. I believe that we will ultimately see that the majority of these forces and factors are out of the control of one nation; that occasionally, world councils or organisations have a go at manipulating language development but 1 am convinced that such attempts are, in the end, futile. Language seems to grow and develop in an autonomous way, pulled about by an array forces. There are deliberate uses through marketing and advertising but the eventual consequences are rarely considered or predicted. Language development is a bit like chaos theory in this respect: a satellite dish...an advert...a TV programme...a pop singer in a range of countries and suddenly new films of language occur - no one has consciously set out to create them, they just happen. ...read more.

[OU video programme, "English, English Everywhere."] In the late 1980's when the Berlin wall came down-there was a large amount of people who wanted access to a developing economy. 'English 2000' is a project headed by the British Council reassessing the role of the language at the end of the century: they say that English is the perceived language with any currency to the institutions of Europe. Finally, for this section, I will conclude by saying that one of the most powerful factors of language change is - and always been- geographical: people moving about from country to country. Over the last two centuries there have been two English-speaking world powers doing just that. Simultaneously, there have been other smaller developing nations as a result of post-colonial independence; they have chosen the language of economic dominance. Stuart Hall astutely said, "This is the century of migration; every migration is a culture clash and every culture clash a language clash, therefore new forms emerge." [OU video IBID] This takes me into my next area of discussion: the threat to other languages and cultures. Diachronically, we can see that the English language was taken to other parts of the world; it became the currency of wealth and economic growth. In the West Indies African slaves were not allowed to use their own languages to suppress possible rebellion. A Creole, the nation language of the West Indies was the result. Generations of Africans were starved of their culture and roots deliberately. Stuart Hall talks about his 1950's education in Harrison College, Jamaica. ...read more.

took root taking with it rhythms and sounds of Africa: a Jamaican Creole grew and we heard a little when Louis Bennett read an extract of her poetry, Back to Africa, Miss Mattie? You no know wha you dah seh ? You haf fe come from somewhe fus Before you go back deh ! [Back to Africa] There is an exciting and vibrant language in the West Indies which has its roots in English. We do not have to always look across the Atlantic to find it: it also exists in urban areas of Britain where ethnic minorities react against the standard in an attempt to establish an identity. The same phenomena occurs in the US. In New York, not only is there a Black vernacular recently termed 'Ebonics' but there is also the growth of another mutated form of English: 'Spanglish' - a combination of Spanish and English. Speakers of Spanish already make up 11% of the United States. Within the U.S. there is also a range of dialects and accents: the Texan drawl and the Brooklyn 'Cockney'. In India, there are many types of English spoken too; the Tamil use of 'only' at the end of sentences is reflected in TV broadcasts. there is also the growth of 'Hinglish' too - a blend of Hindi and English. David Crystal says that there is little danger of monolithic 'English' dominating world culture; at the moment U. S. English is the dominant form, not U.K.English - but even this will be eclipsed by a global English in the future. ...read more.