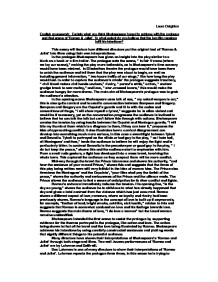 English coursework: Explain what you think Shakespeare hoped to achieve with the prologue and first scene of 'Romeo &amp; Juliet'. To what extent do you believe that the two film versions fulfil his intentions?

Laura Deighton English coursework: Explain what you think Shakespeare hoped to achieve with the prologue and first scene of 'Romeo & Juliet'. To what extent do you believe that the two film versions fulfil his intentions? This essay will feature how different directors put the original text of 'Romeo & Juliet' into films using their own interpretations. In the prologue Shakespeare has given an insight into the play similar to a blurb on a book or a film trailer. The prologue sets the scene, " In fair Verona (where we lay our scene)," making the play more believable, as in Shakespeare's time scenery would have been minimal. In Elizabethan theatre the prologue would have been there to catch the audience and tell them that the play was about to begin, as well as including general information, " two hours traffic of our stage," like how long the play would last. In order to capture the audience's minds' the prologue suggests treachery, " civil blood makes civil hands unclean," rivalry, " parent's strife," action, " ancient grudge break to new mutiny," and love, " star-crossed lovers," this would make the audience hungry for more drama. The main aim of Shakespeare's prologue was to grab the audience's attention. In the opening scene Shakespeare uses talk of sex, " my naked weapon is out," this is also quite comical and is used in conversation between Sampson and Gregory. ...read more.

With the car number plates beginning with MON and CAP, which stand for Montague and Capulet. Their attitudes and appearance contrast vastly, adding to the difference in which the audience see and establish between the two groups. Luhrman establishes the two groups fantastically through use of aesthetics, behaviour and attitude. The conflict in the opening scene has a very western genre feel to it and is similar to a shoot out, as both groups show their guns, and then aim them at each other until the first shot is made. The western sense is also illustrated with the non-digetic spaghetti western style music that accompanies the violence. In the fighting the Capulets' are very haphazard in their aiming and may remind the audience of little children playing Indians and Cowboys. However the Montagues' are very agile and controlled in their tactics. Tybalt (Montague) is very calm and at ease about the fight, he shows this by they way he starts the violence and his expressionless face throughout it. Yet on the other hand Benvolio (Capulet) is your stereotypical innocent hero as he wants to keep the peace and the violence makes him tense, not as ease and quite scared. Although the fighting is a fairly serious and tense part of the opening, comical factors are brought over in a woman hitting a Capulet servant over the head with a handbag. The violence also fits in with the codes and conventions of gang warfare, which affects the whole community, this is illustrated by the conflict being at a petrol stations and the traffic jam seen as the fight concludes. ...read more.

The Prince wears an incredibly eccentric hat and silk robes, which are in neutral colours; they imply high status and wealth. When the Prince enters, trumpets are blown, adding to the importance of him. He creates fear via his threats and persuasive voice; this is shown as when he speaks the market people are silenced. The audience may be lead to believe that the Prince has a similar appearance and character portrayal as what Shakespeare would have wanted and is clearly defined as being of higher social standing. Romeo is introduced in this production framed by an arch, suggesting romance. He also is carrying some flowers, implying he has a feminine side. The non-digetic music used is very light and romantic; the audience also associate this with Romeo, due to his elaborate and eccentric speech. Romeo lolls and sighs, suggesting he feels isolated and that no one can understand his present state. The victims of the brawl pass Romeo and he reacts as if he ashamed that members of his family are responsible for this. It is clear that Romeo is in love, but the eccentricity of him allows for some comical elements, accomplishing Shakespeare's targets. The majority of people in today's society would probably find Luhrman version more compelling to watch, as it is energetic, vibrant and interesting from the start. Yet some people may prefer the traditional version created by Zeffirelli. There is more reasons to comply with Luhrman's productions fulfilling more of Shakespeare's aims, although these are applied to a modern audience, where as Zeffirelli has tried to complete them in a more authentic Elizabethan style setting and manner. ...read more.