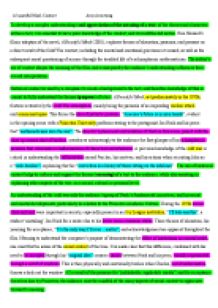 English- Essay on Context in Relation to the film &quot;A Beautiful Mind&quot;.

﻿A beautiful Mind- Context Amy Armstrong To develop a complex understanding (and appreciation of the meaning of a text) of the themes and characters within a text, it is essential to have prior knowledge of the context, and its multifaceted nature. Ron Howard?s filmic adaption of the novel, A Beautiful Mind (2001), explores themes of alienation, paranoia, and pressure as a direct result of the Cold War context, including the mental and emotional grievances it caused, as well as the subsequent moral questioning of science through the troubled life of a schizophrenic mathematician. The author?s use of context shapes the meaning of the film, and consequently the audience?s understanding influences their overall interpretation. Historical context is used by a composer to create a background to the text, and therefore knowledge of this is crucial to fully understand the themes (purpose) of a text. A Beautiful Mind, set predominately in the 1950s, features extensively the Cold War atmosphere, mainly being the paranoia of an impending nuclear attack and communist spies. ...read more.

These themes of alienation, his yearning for acceptance, ?It?s the only way I?ll ever?matter?, and acknowledgement are apparent throughout the film. Meaning to understand the composer?s purpose of demonstrating the effect of institutions on mental health, one must first be aware of the social context of the time. It is made clear that this difference, combined with his need to be accepted through his ?original idea? causes a barrier between Nash and his peers, visually represented through a motif of windows. This is then physically and emotionally broken when Charles, his Id hallucination, throws a desk out the window. AS a result of the pressure for ?publishable, applicable results?, and for acceptance forced on him by Princeton, the audience must be mindful of the many aspects of social context to appreciate Howard?s meaning. For mental illness to be comprehended on an unbiased and informed level, it is vital to have an idea of the social and historical context surrounding it. The director of A Beautiful Mind has successfully shown audiences what mental illness can be like for the person affected by placing us in Nash?s point of view before he was aware of his schizophrenia. ...read more.

Howard has used this theme (concept) to add to the patriotic pressure that Nash feels, and ultimately fuels his code breaking obsession. His struggle with this is portrayed through a car chase with Parcher as he believes that Russians are following them, Parcher tells him to ?take the gun? to which he replies ?I ain?t shooting anybody?no!?. His child-like refusal and the slow-motion capture of the gun shots illustrate his inner turmoil and guilt. The concept of this guilt and questioning if it was worth it is addressed throughout the film, and has to be understood to appropriately comprehend Parcher, and the resulting pressure and realisation that ?nobody wins?. It is essential to understand the historical, social and cultural context of a film to obtain a sophisticated understanding of the themes (text?s meaning) presented. Many texts rely on this information to explain certain elements, such as the mental illness and patriotic pressure epitomized by the cold war context in A Beautiful Mind. Without this knowledge, full analysis and interpretation of characters and themes (subject matter) cannot be comprehended; therefore the audience?s interpretation is hindered as the context shapes meaning. ...read more.