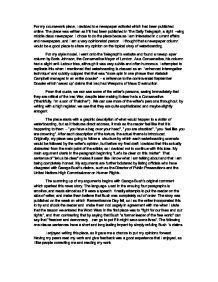 For my coursework piece, I decided to a newspaper editorial which had been published online. The piece was written as if it had been published in The Daily Telegraph, a right-wing middle class newspaper. I chose to do the piece because I am interested in current affairs and newspapers, and I am a very opinionated person. I thought that a newspaper column would be a good place to share my opinion on the topical story of waterboarding. For my style model, I went onto the Telegraph's website and found a newspaper column by Boris Johnson, the Conservative Mayor of London. As a Conservative, his column had a slight anti-Labour bias, although it was very subtle and often humorous. ...read more.

The piece starts with a graphic description of what would happen to a victim of waterboarding, but as it features direct address, it makes the reader feel like that it is happening to them - "you have a bag over your head", "you are shackled", "you feel like you are drowning". After each description of the torture, the actual theme is introduced. Originally, my piece was going to follow a structure by which each waterboarding scenario would be followed by the writer's opinion, but before my final draft I decided that this actually distracted from the main point of the article, so I decided not to continue with this idea. ...read more.

the reader and make them nod sagely in agreement with me when I state that the reason we entered the Word Wars in the first place was to "fight for our lives and our rights", and then contrasting that by saying that Bush "a former leader of the free world" can say that "freedom and democracy... can go to pot if it might save some lives". The following one clause sentences have a short and long lasting impact by simply refuting Bush's claims. I enjoyed writing this piece, as it gave me a chance to put my opinions forward. Having my peers read my work and give feedback was a good experience that I enjoyed, as I like people correcting me and reading my work. ...read more.