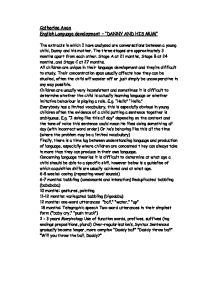 Catherine Axon English Language development - "DANNY AND HIS MUM" The extracts in which I have analysed are conversations between a young child, Danny and his mother. The three stages are approximately 3 months apart from each other. Stage A at 21 months, Stage B at 24 months, and Stage C at 27 months. All children are unique in their language development and they're difficult to study. Their concentration span usually affects how they can be studied, often the child will wander off or just simply be uncooperative in any way possible. Children are usually very inconsistent and sometimes it is difficult to determine whether the child is actually learning language or whether imitative behaviour is playing a role. E.g. "Hello" "Hello." Everybody has a limited vocabulary, this is especially obvious in young children often the evidence of a child putting a sentence together is ambiguous. E.g. "I doing like this all day" depending on the context and the tone of voice this sentence could mean He likes doing something all day (with incorrect word order) Or he's behaving like this all the time (where the problem may be a limited vocabulary) Finally, there is a time lag between understanding language and production of language, especially where children are concerned they can always take in more than they can produce in their own language. Concerning language theories it is difficult to determine at what age a child should be able to a specific skill, however below is a guideline of which acquisition skills are usually achieved and at what age. ...read more.

He finds it difficult to produce a long sentence due to lack of conjunctions "and" therefore he uses fillers and stutters to keep his turns going. His pronunciation is not good he is not fluent and stutters in some parts of the conversation "the big long lo long long train" which may be down to his limited lexis. However towards the end of the conversation his pronunciation develops "fast car vintage" as a direct cause of new lexis being learnt. His word order is incorrect in most sentences however, this does improve towards the end of the conversation which could be due to imitative behaviour "splash piggy" or that Danny has actually understood the language "Becca draw on there" his word order improves but areas of speech such as tenses prove difficult for Danny. At this stage Danny's mum's input is sometimes quite confusing and seems to leave Danny more confused than anything "What's he lifting up? What's the crane lifting up?" this could be because she is trying to find the correct level to come into the conversation at, however Danny is left simply confused. On many occasions her sentences are far too complex for Danny or even a more advanced 2-year-old "What do you think it's doing if it's got brushes on the car?" "What do you think he's putting the water on the road for?" His mother uses prompt "isn't it?" she attempts to involve Danny in the conversation whenever possible she also repetition and imitation to back up what he says whether it be correct or nearly "fast car vintage." ...read more.

Danny's progress is evident in most aspects of speech. Compared to the guidelines of how a child's speech should have improved with age Danny is slightly behind, this isn't because he is less intelligent or has a problem it is simply because no child is average, no one has the same learning speed because this is part of being an individual. Danny's mum became less in charge as Danny got older, she was no longer needed to lead the conversation and therefore both Danny and his mum were on more of an equal status, she no longer needed to correct Danny because towards the end he began to understand her. The turns of both Danny and his mum became longer as he aged this shows the major development in Danny's language acquisition that he is no longer dependent on his mother and has his own be it small vocabulary. Danny is still to learn a more vast vocabulary but this will come with age and experience, he is yet to perfect his use of tenses and sometimes telegraphic language plays a part in his turns. The majority of his language is good but not perfect, but even teenagers have difficulty in this area nobody's language is ever perfect. He has to improve fluency but this will come once he has a wider vocabulary. Overall Danny has progressed competently in all areas of speech, he is not ahead for his age but as explained we are all individuals and do not follow a trend by any means. ...read more.